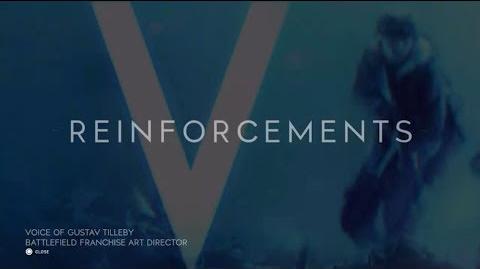 Reinforcements are a system of support assets available to squads in Battlefield V, succeeding the Commander resources available in prior games. They may take the form of vehicles, strike options, or logistical support. Reinforcements are only available for use by Squad leaders and are obtained by spending a certain number of squad points, also called Requisition Points.

Requisition points are acquired when squad leaders direct their squad to successfully capture an objective. They may also be obtained through teamwork actions between squadmates—Buddy Revives, squad healing, squad resupplying, squad spot/assists, and squad spawning. Certain Combat Roles earn bonus squad points for specific actions, such as destroying vehicles as the Vehicle Buster role. Squad points are displayed next to the squad leaders name in the lower left of the screen. Squad points are tied to the specific squad that earned them meaning that they will not carry over to a new squad. Additionally squad points do not carry over to subsequent rounds, including subsequent days of a Grand Operation.

The Sector Artillery and Smoke Barrage reinforcements were added in the second Tides of War chapter, Lightning Strikes on March 7, 2019.

A reinforcement can be called in by bringing up the Squad Reinforcement wheel and selecting the desired option, once enough points have been accumulated. Using the Binoculars, the target area for reinforcements such as artillery barrages can be designated. Vehicle reinforcements become available from the team's deployment once called in and can be spawned on by squadmates, although if this does not occur within a short time the reinforcement will disappear without refunding requisition points.

The available reinforcements are determined by the map and gamemode, with larger modes offering more variety. The ability to call in a certain reinforcement may be limited if a friendly squad is already making use of one. Each reinforcement also has a cooldown period that prevents it from immediately being called in again.

Call-ins are a similar system of assets that can be requested during battle, from the Ranger drone to an entire main battle tank. Call-ins are dropped in-field where the player requests, or spawned at the team deployment.