Stealing Tanks is a Codex Entry featured in Battlefield 1. It is unlocked upon obtaining all engine components undetected in the chapter Breakdown in the singleplayer mission Through Mud and Blood. 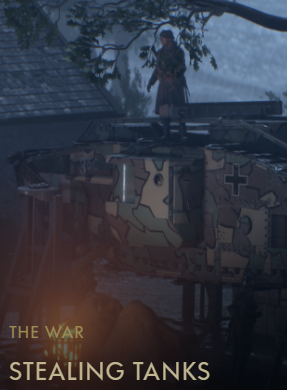 The capturing of enemy tanks was more feasible for the German Army than manufacturing its own expensive and fragile A7Vs. By the summer of 1918, more than 300 abandoned and damaged tanks had been salvaged and transported behind German lines. They were repaired and remodeled near the Belgian town of Charleroi.

German engineers of the BAKP 20, the automobile workers of the Bavarian Army had turned a former locomotive manufacturing plant into a huge tank workshop. Here they stored all their captured tanks, the "Beutepanzer". The engineers not only repaired the "Beutepanzer", but also overhauled their interiors and equipped them with standard German communication devices, optical equipment, and ammunition.

The guns had to be converted to the calibers of the German artillery, usually 57mm tank guns, which were used to re-equip the "male" version of the Mark IV.

Retrieved from "https://battlefield.fandom.com/wiki/Stealing_Tanks_(Codex_Entry)?oldid=331354"
Community content is available under CC-BY-SA unless otherwise noted.