"There's never a better time to find your courage than in combat." 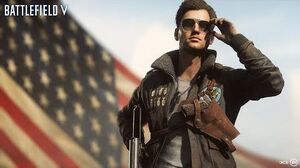 Steve Fisher is an Elite available in Battlefield V for the Allied Powers in The Company. He was released alongside Akira Sakamoto on May 12, 2020.[1]

As with other Elites, Fisher features a unique best squad animation and an exclusive melee weapon, the Knuckle Duster. It is unlocked upon completion of Fisher's Special Assignment.

There are two things that Steve loves in the world, flying and motion pictures. When he is not chasing down enemy fighters in the air you will likely find him quoting his favorite film stars. He embraces combat as if there was never any danger to his life.

A fearless pilot. Always two steps ahead of the enemy in any situation. Has a habit of finding himself in underdog situations.

Retrieved from "https://battlefield.fandom.com/wiki/Steve_Fisher?oldid=375596"
Community content is available under CC-BY-SA unless otherwise noted.