Strategic Bombing is a Codex Entry featured in Battlefield 1. It is unlocked by destroying the fort in the chapter Total War in the singleplayer mission Friends in High Places. 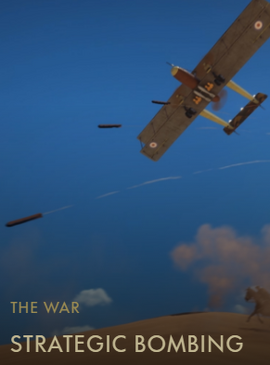 Strategic bombing - the destruction of the enemy's ability to continue the war - was a new concept. Bypassing the enemy's forces by simply flying over them and hitting the war industry at home was now possible with airship and planes.

The Germans were the first, sending their Zeppelins on bombing raids over British and French cities. Bombers were soon made by all sides to carry as many bombs as possible to drop over strategic targets like railway stations or industrial sites. the lack of experience and technology usually prevented more than a few casualties or fear itself, but strategic bombing opened a Pandora's Box, and the bombing of civilian structures was - from then on - fair game.

Retrieved from "https://battlefield.fandom.com/wiki/Strategic_Bombing_(Codex_Entry)?oldid=343392"
Community content is available under CC-BY-SA unless otherwise noted.