For other versions of the map, see Strike at Karkand (Disambiguation)

Yes
"Control of the industrial facility and harbor at Karkand motivate this assault by US forces, where they find MEC forces marshaling to defend the industrial city and determined to meet this attack with stiff resistance. The terrain surrounding Karkand sufficiently opens to allow for sweeping fields of fire but the open ground increases the danger Posed by anti-vehicle missiles and sniping. It is thus vital for both sides to secure firebases in Karkand’s sheltered city center."

Strike at Karkand is a map featured in Battlefield 2. It sets the United States Marine Corps and Middle Eastern Coalition forces in combat within the industrial region of Kuwait City, Kuwait.

The starting uncap flag for the USMC, there are three spawn points for it - one at the very south of the map (where most US vehicles are located), and two to the northeast and northwest. Spawning at the two front points, the US team may attack the Hotel on either side, or send team members into the mountains or alley where they can continue on to the critical Suburb or Train Accident, respectively. As most servers prohibit spawn trapping except for destroying commander assets, there is rarely any action in the area surrounding the actual gas station.

The southernmost MEC spawnpoint and closest to the USMC's uncapturable flag, the flag is situated in front of a hotel's front door, and is accessible by ladders on either side, or the most direct and fastest route, the stairs in front. It's generally wise to have an entire squad on the flag when capturing it, as enemy troops can spawn on 3 sides. The flag may also be captured if the player stands inside and/or on top of the telephone booth in front of the building. (Available on all maps)

Only a few feet north of the Hotel, the capture area can be entered through a hole in the wall east of the flag, the direct opening facing the Hotel, or around the back of the building that marks the square. Players can stand outside the wall to capture the flag, but must take care as the enemy can spawn right in front of them. The enemy may also spawn in the pathway coming from the back of the building. (Available on all maps)

Situated on the street below the Square, this flag can be defended more easily than others, as the market stands give a considerable amount of protection against most small arms fire. (Available on 16 and 32 player maps)

The farthest flag to the west, an early USMC capture of this flag can help turn the tide of battle. USMC players can reach this point without much direct confrontation by traversing the hills. In addition to standing around the flag, one can climb atop the building and capture the flag by crouching in the corner of the sandbag barrier.(Available on 32 and 64 player maps)

Possibly the most critical flag on the 64 player sized map, controlling this point can help split the map in two. USMC players can go down the alley to the east of the Hotel and Square to reach this faster, but it's hard to pass this way when a considerable amount of MEC soldiers is defending the general area. The capture area has two explosive barrels, so it's best to deal with these before getting close to the flag.(Available on 32 and 64 player maps)

Northernmost flag on the map, it's easily accessed by crossing the bridge connecting the Train Station and the west part of the map.(Available on 32 and 64 player maps)

The flag to the south of Gatehouse, the direct path to this flag is a partly submerged crossing at the south end of the Train Accident. One may also go around the side of the strip (which connects the Gatehouse to the Cement Factory), where they will find a ramp leading to the back of the area. The team in control can defend this point numerous way, such as sitting at the LMG behind the flag, hiding behind the crates, or hiding in the small warehouse. (Available on 64 player map only)

The warehouse lies in the center of the map's eastern section, therefore giving the team in control of it quick access to the surrounding 3 flag. However, the team in control must also remember that enemies may enter from the back, front, and side, meaning a full squad would be an ideal minimum in order to defend the flag.(Available on 64 player map only)

The easternmost flag, this flag houses the commander assets on the 64 player sized map. The offensive team can sneak around the back of the building and attack unsuspecting defenders.(Available on 64 player map only)

UAV Trailer- Behind the west building at Gas Station
Radar Station- South of the gas station itself, next to the fenced area
Artillery Guns- Dispersed across the area surrounding the northeast 'uncap' spawn point.

One of the most strategic points is the Suburbs. Suburbs contains passage through The Square and Train Accident and has a machine gun emplacement on the rooftop and an anti-tank emplacement. Suburbs contains several sniping positions and has a perfect rugged cliffs which gives a perfect spot for machine guns and vehicles to pin advancing opposing teams. Suburbs downhill roads gives the troops the opportunity to spam their opponents with grenades and gun fire. Its gives the advantage for the forces to outflank their enemy from Square or to Train Accident.

The Factory contains all the MEC's assets including 2 Defensive Machine Gun Watch Towers protecting both passages to The Factory from enemy offensives and has a secret passage to get to the Factory's rooftop, a perfect spot for an entire squad to flank enemy troops from far distance. Its gives the advantage to begin full strength offensives to capture Warehouse, Gatehouse and Cement Factory.

Warehouse is one of the best strategic points on the entire map. It contains two Mounted Machine Guns both at front and back of the flag, It has a catwalk just behind and left side of the flag inside the warehouse it includes a small open entrance in the right side. The Warehouse is a perfect stronghold for a Losing or Winning team, but it contains several Flank points making it easier for the opposing team to capture the Warehouse but it may be countered by defending the weakest positions at all times. 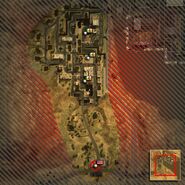 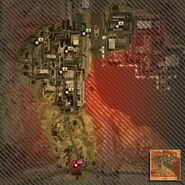 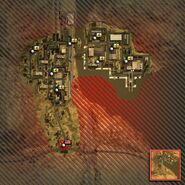 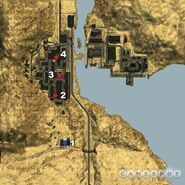 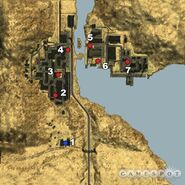 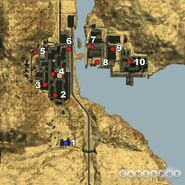 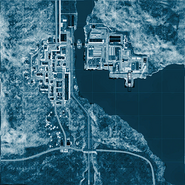 Satellite view of the map
Add a photo to this gallery
Retrieved from "https://battlefield.fandom.com/wiki/Strike_at_Karkand_(Battlefield_2)?oldid=339389"
Community content is available under CC-BY-SA unless otherwise noted.