For other versions of the map, see Strike at Karkand (Disambiguation)

The US deployment is not much more than a few houses on either side of a long road leading into the city. There is only a small line of trees blocking the lines of sight for teams to avoid combat. The deployment only contains two armored vehicles to strike the enemies guarding the city. US soldiers must act fast to avoid being pinned down at the road leading to the hotel as most to all of the RU soldiers set up an ambush at the Hotel. A good tactic to use when pinned down is to move along the rocks on the east side of the road and flank enemy flags to create an opening for allies to attack the defending Russians.

The Hotel is the first area of conflict in every match. Russian soldiers must set up a defensive line by the Hotel to stop the oncoming US armor and infantry. The tank and LAV are usually first to arrive at the Hotel beginning the attack. Mines should be placed along the road to counter the armor allowing the vehicles to inevitably blow up or be trapped at the deployment due to the only entrance for vehicles to be blocked off. The Hotel is usually defended by snipers at the Square who pick off infantry and laser designate enemy armor for AT soldiers. Once the US capture the Hotel it becomes a forward deployment zone and begins to lack combat.

The B flag is located next to a tall building that has a ladder that leads to the rooftop and has a small market place in the middle with what appears to be a well. It is often protected by snipers and support troops on the buildings surrounding the flag. Much of the action takes place at this flag and is accessible by both vehicles and infantry, making it a hard flag to keep for long.

The Market objective is located near the Square and is accessible from B by a flight of stairs. The surroundings are filled with buildings where infantry can hide and ambush any incoming hostiles, especially vehicles. Controlling B eases capturing and holding C because of the advantage position it has over that flag.

Another strategic hotspot, as it is accessible directly from the US spawn by going to the side. It features multiple two-floored buildings with a road trailing through the middle, connecting points E and B. It also possesses a high ground, making the buildings and nearby terrain a common overwatch point for Recon players with sniper rifles. It also overlooks the C and B objectives. If somehow being defended, it's the hardest flag to capture.

It's situated between the road that links the suburbs to the Gatehouse and the Warehouse. The wagons standing on the rail tracks provides good cover for the infantry defending the flag, but are always exposed to fire coming from F, G or D and C, depending on which side of the railway you are staying. The flag itself is easily accessible to vehicles, making it probably the most contested flag of the map.

Act as the deployment of the Russian team, often the attackers will try to rush with their LAV-25 to this flag to it to gain the extra armored vehicles it provides. Here spawns 1 heavy and one light armored for any team that controls it.

The Suburb flag from the 64-player map is moved down the road and closer to flag B (Square), in a smaller square mostly surrounded by tall buildings. It has close proximity to both the Square and Market flags, as well as controlling a road that leads straight to the Compound/Train, and access to an outside path to the Hotel and US Deployment. This makes it a crossroads of the city, and holding this flag can be very useful for mounting assaults on other key areas of the map. The villas on the hill overlooking the flag are a popular defense and lookout point for snipers and support gunners.

The Market objective is located near the Square and is accessible from B by a flight of stairs. The surroundings are filled with buildings where infantry can hide and ambush any incoming hostiles, especially vehicles. Controlling B eases capturing and holding D because of the advantage position it has over that flag.

It's situated on the roads coming from both D and C. The railroad cars standing on the tracks provide good cover for the infantry defending the flag from attackers and give defenders opportunity to take enemies by surprise, but are not within the flag control radius itself. The flag itself is easily accessible to vehicles coming from the Market or Fountain.

Part of Strike at Karkand in BF3.

Another part of Strike at Karkand in BF3.

Artwork of Strike at Karkand 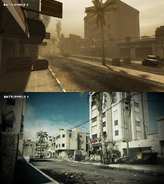 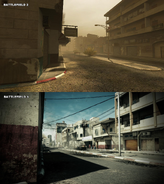 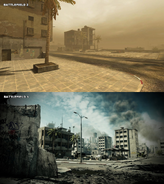 Detailed interiors of one of the buildings.

A brief capture of the warehouse interior. 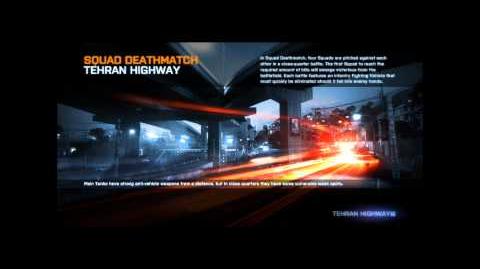 Retrieved from "https://battlefield.fandom.com/wiki/Strike_at_Karkand_(Battlefield_3)?oldid=343580"
Community content is available under CC-BY-SA unless otherwise noted.