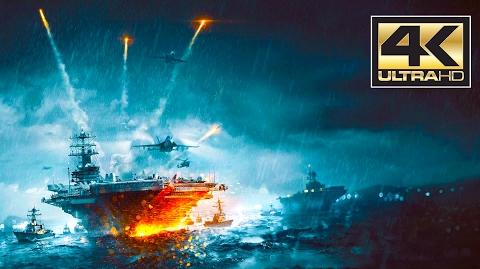 "In this room, I am invisible. I am dead...already. If I cannot show my face, if I cannot speak to my brothers, without fear...then I have lost. I need to know where I stand. Open the door Sergeant..."

Suez is the final mission in the Battlefield 4 Campaign. It involves saving the Valkyrie and destroying Chang's warship.

Tombstone para drops from a Gunship provided by Greenland overhead onto the USS Valkyrie. There, they discover the ship heavily damaged and under siege by Chang's forces. Garrison requests assistance over the radio, to which Irish responds. Tombstone fights their way into the ship.

Tombstone then enters the ship where they encounter Pac who is revealed to have survived his injuries sustained in Singapore. While deciding not to tell of how he survived, Pac does state that he had to "crawl through miles of shit with a hole in [his] stomach".

While killing any hostile forces along the way, Pac leads them to Garrison, who is holed up in the medical bay along with Jin Jié and the ship's doctor. Upon arriving, they discover that Chinese forces have almost breached the medical bay door which would consequently mean the death of them all. Seeing no other way, Jin Jié states that they must allow the Chinese soldiers to enter so that they can see his face and ceasefire. Garrison is highly against this plan however, believing that his plan is foolish and that it would result in all their deaths.

Jin Jié then asks Recker to open the door, who then disobeys Garrison and complies with Jié's wish. As the soldiers enter, they hold Recker and the others at gunpoint. Jié then reveals his identity to them, ceasing any hostilities. The soldiers then rejoice that their leader is alive and call other Chinese forces to spread the word.

Then suddenly, without warning, Chang's warship launched an attack on the Valkyrie to "bury the truth" with everyone in it. With the Valkyrie defenseless and nothing left to strike Chang's warship, Irish and Hannah devise a plan to plant C4 on the enemy warship and destroy it. Garrison, realizing the risk yet knowing there is no other alternative, approves of the plan. Before departing, Pac reveals that he is staying behind on the ship to help protect Jin Jié and makes them all promise they will all return safely.

The remainder of Tombstone then drives a patrol boat toward Chang's warship, avoiding heavy fire from enemy watercraft along the way. After reaching the ship, Irish plants the C4 and the group uses grappling hooks to ascend to the bridge above for safety. Hannah is then given the honor of destroying the ship, only to discover the remote detonation has failed, requiring someone to sacrifice themselves and manually plant more C4.

The player then has three different choices from here:

If the latter was chosen, Recker and the surviving teammate are picked up via helicopter and taken back to the Valkyrie, officially ending the conflict between the United States, Russia and China. During the credits, a new dialogue between Irish and Hannah can be heard, implying that both of them may have survived after all.