Edit
watch 02:30
Dead Cells Final DLC - The Loop
Do you like this video?
Play Sound

PC
"As the PAC launched diversionary strikes from Italy into North Africa, it secretly gathered forces in the Sinai Peninsula to prepare for a full-scale assault on the continent. On May 1st, four PAC Command Divisions flew into Libya to engage the EUs 6th Army Group. This left the 5th Corps at the Suez Canal without support when the Southern Command Group, led by General Muunokhoi, raced into Egypt. The EU forces staved off Min-shiks army until help finally arrived via the 10th Airborne Division. Had the PAC seized the Suez Canal, it would have severely compromised the EU's ability to defend Africa."

Suez Canal is a multiplayer map in Battlefield 2142. It features large open areas that host armored battles, and close quarters areas where the battle relies on infantry. The map is playable in both Conquest and Titan modes to play in 16- and 32-player mode.

The PAC deploys from the Outpost and Military Base uncaps, with commander assets located at Outpost.

EU commander assets are located at Refugee Camp or Inner Bridge Lock, relatively close together. As this flag can be captured, care should be taken to safeguard this flag and its many resources.

The Refugee Camp links to Inner Bridge Lock via a highway bridge across a developed canal. A large breach in the defensive wall gives sight and infantry access to the north of the bridge.

Vehicles will only spawn for the EU team, including two battlewalkers, two tanks, and a gunship.

This flag is not used on the smaller Conquest Assault map.

A massive administration building overlooks much of the western side of the map, its roof only accessible by air. The bridge across the main canal links this flag to Outer Bridge Lock, with catwalks overhead and underneath. AA guns are located at each bridge head. Defensive walls block much of the eastern and southern sides of the map, with a railgun covering each entrance.

An additional battlewalker, gunship, and FAV spawn for the EU here.

On small Conquest Assault, the EU assets are contained here instead of Refugee Camp.

Three guard towers stand here, connected by defensive walls to the main canal bridge. Trench structures are built on each side of the road, with an additional system to the north looking over the canal.

A tank is available to the EU team when they have control of the flag.

Both spearheads of the PAC assault converge here, at a facility just north of a road bridge. Some short buildings and cargo containers provide cover, as does the surrounding terrain.

When captured by the PAC, this flag provides a tank.

Running along the north border of the map is a pipeline leading to the Oil Station. The pipeline continues on to Silo 3, and northeast past the Outpost. A large hill covers much of the eastern approach.

The flag provides the EU with another tank.

Set in a low area is the Dry Lake flag, close to the Military Base. Three large buildings stand next to the flag.

Another set of buildings closer to the highway give some overwatch. These buildings house the flag on small Conquest Assault.

The last tank available to the EU can be found here.

Outpost contains half of the PAC's vehicles, and all of its commander resource structures. The PAC deploys two tanks, an APC, a gunship, and two FAVs from here. A single AA gun defends the base.

The remainder of the PAC's vehicles spawn from here, with an additional APC above the similar lineup available at Outpost.

On small Conquest Assault, this flag is not available.

The EU Titan starts at the Inner Bridge Lock, just south of the main canal building, and within easy reach of Silo 2. The perimeter defense cannons cover much of the base, and can also reach slightly onto the roof of the main building. APCs can be hidden around the building out of reach of the cannons. The roof can be used to harass the Titan, although it is otherwise of little strategic value.

The PAC Titan starts at Military Base, within reach of Silos 1 and 3. It is surrounded by plenty of open ground, making nearby APCs easy targets.

Each ground base spawns a main battle tank, an APC, a fast attack vehicle, and an air defense gun.

All silos spawn an APC and a fast attack vehicle.

This silo is at Dry Lake, closest to the PAC. Soldiers can pod onto most of the facility.

This silo is at the Outer Bridge Lock, closest to the EU. Soldiers are able to reach the west wall, just barely onto the silo itself.

This silo is situated north of Silo 1. The PAC Titan in its starting location is able to deposit infantry via launch pod onto the high tower or on its side of the hill.

The helipad at Outpost is still available for use by either teams' air vehicles, although out of infantry bounds.

This silo is at the north of the map, near the pipeline and west of Oil Station. It is a large facility with many tall storage silos. A Rorsch Kz-27 sits at the south entrance, covering much of the central airspace.

This is the silo placed in the center of the map, near Trash Dump. The silo is close to the highway bridge, and can be captured from a position just overlooking it, although exposed at road level. Another tall tower gives vantage for snipers able to land on top of it. 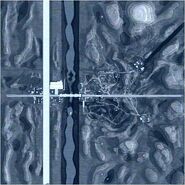 An early render of Suez Canal
Community content is available under CC-BY-SA unless otherwise noted.
Advertisement