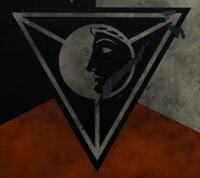 Sulis is a secretive organization featured in Battlefield V, referred to most prominently in the Firestorm gamemode. The group is believed to be responsible for the unusual events occurring on the Norwegian peninsula of Halvøy some time during World War II.

The organization's name comes from the Roman-British goddess Sulis Minerva, a depiction of which appears at the center of their logo and flag, the latter of which is comprised of triangular section of black, white and orange. Ostensibly some kind of research group, the organisation either constructed or occupied a number of military outposts throughout Halvøy. As Norway was under German control for the majority of World War II, Sulis is believed to be part of, or at least tied to, the Wehrmacht, as reinforced by a document written by Sulis agent Lieutenant Colonel Otto Bauer which is signed with the phrase "For Germany". Sulis also manages a fleet of predominately German military vehicles, which include Opel Blitz trucks, Ju-52 transport aircraft, and FI 282 Kolibri prototype helicopters, in addition to tanks and other military hardware imported to protect their research.[1] Despite this, they also make use of English-spoken propaganda which is broadcast to players in the hangar.

During the Firestorm gamemode, Sulis facilitates the paradropping of dozens of British and German soldiers onto Halvøy who subsequently, either alone or in groups, fight each other to the death. Their motives for doing so are unknown, but may be linked to the closing ring of fire encountered on the peninsula. Sulis' logo appears on a number of strange machines across the region, several of which have small patches of scorched earth around them - implying the organisation may be generating or controlling the firestorm using the machines. Aside from destroying all buildings and material in its path, the firestorm forces players in the gamemode into a smaller pocket as the match progresses, encouraging further conflict. Sulis is also stated to be responsible for stocking the peninsula with weapons and equipment in strongboxes and supply caches for use by players, although all Sulis personnel have vacated the peninsula before players are parachuted in.

Recently, Sulis built several concrete watchtowers along the southern coast as well as an excavation site on the eastern portion of Halvøy. While the excavation site was originally deemed insignificant by the organization, renewed interest in the site led to the construction of a large dome structure. 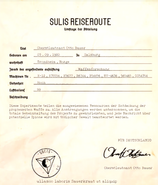 Report written by Otto Bauer. The main body reads as "These experiments allocate the resources shown to the discovery of the prophesied weapon. Every effort is made to ensure total secrecy in the projects, and any message about potential spies will be answered with deadly force."

Accompanying the report is a map showing the path of Bauer's expedition across Halvøy.

Sulis' logo on a supply crate

Another logo on a military cargo truck

Sulis banner found in the hangar. Flags of the same pattern can be found adorning military outposts across the peninsula.

One of the strange machines found in Halvøy