An airdrop is a type of airlift, developed during World War II to resupply otherwise inaccessible troops, who themselves may have been airborne forces. In some cases, it is used to refer to the airborne assault itself. It involves crates, boxes & containers of different sizes with parachutes being pushed out of the aircraft's side cargo doors or aircraft designed with rear access ramps, lowered in flight, that allowed contents to be rolled out the back.

This delivery method has been utilised by both military and civilian operations alike, from ammunitions, military vehicles & weapons delivery, to humanitarian and disaster relief in inaccessible areas.

The Supply Drop is a commander resource in Battlefield 2, Battlefield 2142, and Battlefield 4. It can heal players, repair vehicles and destroyed objects (although at a slower rate than the medic or engineer), and replenish ammunition within its area of effect.

It is commonly used by commanders to repair resource objects (UAV trailer, Artillery gun, etc.), as the supply drop does not depend on a resource object and an engineer may not be available. Since both teammates and opponents can benefit from the supply drop, a commander must be careful when doing this - if a Spec Ops soldier who destroyed the objects is still in the vicinity, he will be able to reload his C4 and destroy both the supplies and the strategic objects.

The supply drop can also be used to crush inattentive enemies, especially snipers. For this feat, the commander is credited with a generic kill against the victim.

Supply crates can absorb quite a bit of fire before exploding (without blast damage). When faced against a distant enemy vehicle near a supply crate, it may be wise to destroy the supply crate with an Anti-Vehicle weapon before engaging the vehicle threat. Engineers can also repair a supply crate to restore its protective ability, though this does not allow it to remain on the field longer.

The Supply Drop is a commander resource in Battlefield 2 that drops a supply crate at a position designated by the Commander. It can heal soldiers, repair vehicles & resupply soldier's ammunition and destroyed objects (although at a slower rate than the medic or engineer) within its area of effect

The supply drop can also be used to crush inattentive enemies, especially snipers. For this feat, the commander is credited with a generic kill against the victim.

It remains the commander's only resource that cannot be disrupted by sabotage, although the supply drop itself can be destroyed.

Supply Drop is a commander resource in Battlefield 4 as part of the squad asset loop that can be purchased by a Commander for two segments of the progression bar. It deploys a pallet that will heal, resupply, and repair any nearby friendly units, as well as enemies.

It also allows users to change their kits without having to redeploy. Soldiers can choose from their current loadout for all four infantry kits. Vehicles can instantly reload their weapons without depleting reserve ammunition, although the reserve ammunition rate is unchanged. Players are also able to exchange their kits for other kits with drop-able assets. Players are able to change their kit to an Assault, deploy medic bags/packs and proceed to switch to a Support kit from the Supply Drop and then deploy Ammo Box/Pack and vice versa, providing players with extra/backup sources of ammunition and medical supplies simultaneously, even in the case of the Supply Drop being destroyed or is removed from the battlefield.

The commander also has the ability to utilise the Supply Drop as a makeshift barrier or cover for friendly infantry. When deployed in the right position, the commander can use the Supply Drop to create obstructions to slow down enemy infantry advancements (such as placing in doorways or staircases). The Supply Drop can provide portably, temporary cover for friendly infantry, especially in open spaces where bullet fire is common. An excellent example of this is in the multiplayer map "Siege of Shanghai". The Commander can choose to deploy a Supply Drop in front of the elevators on the roof of Skyscrapers which faces the entrances of elevators, allowing friendly forces easier defensive measures, cover and positions against enemy forces attempting to gain access to the top.

As before, the Supply Drop can crush unwary infantry or set off explosive objects.

A permanent and indestructible Supply Drop is present in the US Deployment in the Test Range, near the shooting range. 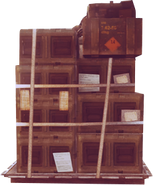 Supply Drop asset as it appears on Commander's Menu U.I

The Supply Drop returns to Battlefield 1 in the In the Name of the Tsar expansion, not as a commander resource, but as a deployable gadget from the Ilya-Muromets heavy bomber using the Support Bomber Package.

Aside from its delivery method, it functions much the same as in past titles, providing supplies and healing to infantry within its large radius.

The supply drop can be destroyed by explosives such as the AT Rocket Gun to prevent its use by the enemy. As the container requires time and room for its parachute to deploy, the ability cannot be used at low altitudes.

The Supply Drop is a Squad Reinforcement featured in Battlefield V. Squad leaders can call in drops for additional ammo and health for teammates.

Supply Drops appaer in Battlefield 2042 in the form of the Loadout Crate specialty for Angel. After marking a drop point, a supply drop will parachute down and allow players to switch their loadouts in a similar manner to past installments.