Supply Drop is a Codex Entry featured in Battlefield 1, introduced in the Battlefield 1: In the Name of the Tsar expansion. It is unlocked upon winning a round of Supply Drop 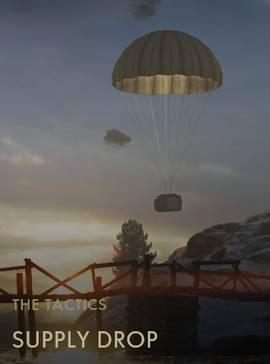 Supplying an army in the field was especially difficult for Russia, since its infrastructure wasn't ready to supply so many soldiers over such a long time. Railway lines and roads were too few and often of poor quality, which led to frequent munitions crises in the Russian army. Sometimes the Russian soldiers lacked basic equipment like rations, ammunition, boots, winter-gear, or even rifles to fight. Many were forced to take clothing and weapons from dead soldiers. Advances were cut short by the shortage of artillery shells, and the harsh environment of snowy mountain ranges and muddy swamps delayed the supply system even further. To combat this, many Russian officers tried to create supply depots near the frontlines and even stockpiled rifles and ammunition bought from Japan, France, and Italy, or captured equipment from the enemy. The Russian arms industry did improve greatly during the war, and the nation’s agrarian sector was mostly unaffected, but the constant strain on the transportation lines and the prioritization of the army caused massive shortages of just about everything in the cities, which led to a huge increase in revolutionary activity.

Retrieved from "https://battlefield.fandom.com/wiki/Supply_Drop_(Codex_Entry)?oldid=343372"
Community content is available under CC-BY-SA unless otherwise noted.