The Support kit is featured in Battlefield 2. The kit's primary purpose is to resupply teammates with ammunition via his Ammo Bags on the battlefield as well as lay down suppressive fire on hostiles using the kit's light-machine guns. The Support, along with the Assault and Anti-Tank, has body armor equipped, meaning damage multipliers to the torso are decreased against the player, allowing him to survive a few more hits to the torso than those without armor. However, the armor reduces the the Support's stamina, making sprinting significant distances and general mobility somewhat of a problem. 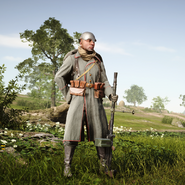 With the limited starting ammunition and general low reserve ammo-carrying capacity of players due to the Attrition system, the Support kit serves an important role in any squad. Using the tossed Ammo Pouches that are always equipped, Support players can refill teammates when they have run out, or top up their ammo to maximum if none has been used. A stationary version of the Gadget, the Ammo Crate, can be chosen as their Gadget 2 for players to retrieve Ammo packs from.

Aside from resupplying, Support players have taken on increased responsibility with the introduction of Fortifications. The Engineer role allows Supports to build these cover positions faster, in addition to exclusive installations including tank traps, barbed wire, pontoon bridges and stationary weapons. Ammo and Health caches, stationed near most objectives, can only be repaired by Support players. Their Repair Tool also grants them the ability to repair friendly vehicles.

Depending on their role, Support players can also equip a similarly versatile array of gadgets. These range from anti-personnel S-Mines, anti-vehicle AT Mines and spotting flares. 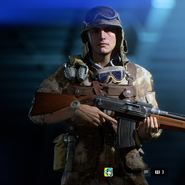 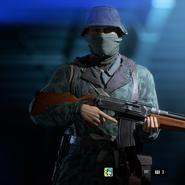 Retrieved from "https://battlefield.fandom.com/wiki/Support?oldid=346430"
Community content is available under CC-BY-SA unless otherwise noted.