Suppressing Fire is a Codex Entry featured in Battlefield 1. It is unlocked upon playing as the Support kit for thirty minutes. 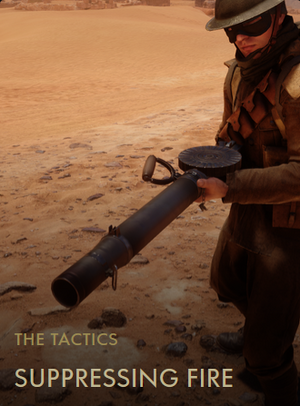 The small unit tactics developed in WW1 still form the basis of modern warfare. As light machine guns became more and more common in WW1, infantry tactics changed profoundly. One of the earliest new tactics formed around the LMG was Walking Fire, which meant that advancing units would fire their weapons from the hip while closing with the enemy to suppress and pin them down, usually followed up by a close combat infantry charge - a tactic requiring rapid-fire weapons and a lot of ammunition.

Originally a French concept, Walking Fire became practical in WW1 through the French use of their light Chauchat LMG. Walking Fire kept being described in US tactics manuals from the 20s and was highly favored by General Patton in WW2.

LMGs enabled independent action by platoons, and from this the modern fire and movement tactic was developed, originating on the western front and utilized by all armies towards the end of WW1. The LMG squads would be sent forward at the beginning of an attack, preferably before the preparatory artillery and mortar bombardment had ended, and take up positions on the flanks to act as "offensive points".

The LMG squad was equipped for independent action with pistols, rifles, grenades and entrenching tools to be able to deal with enemies they might come across. As soon as the bombardment was over the LMGs would open fire in controlled bursts to suppress the enemy and neutralize any remaining enemy MG positions in order to provide cover for their own infantry advance. When the first infantry wave reached the enemy position, the LMG squads would then follow the first wave, dig themselves in and fire at the retreating enemy. The LMG squads were supposed to move over open terrain, while riflemen would move over covered terrain, in providing mutual fire support as one group at a time rush forward in a leapfrogging

Retrieved from "https://battlefield.fandom.com/wiki/Suppressing_Fire_(Codex_Entry)?oldid=343339"
Community content is available under CC-BY-SA unless otherwise noted.