For the similar gadget, see Autoinjector.

A Syringe is a simple piston pump consisting of a plunger that fits tightly in a tube. It is used for many medical procedures that consist of injections, and is usually used with a needle.

The Syringe is a gadget featured in the Battlefield: Bad Company 2: Vietnam expansion, issued to the Medic kit. It is equivalent to the base game's defibrillator, and like the defibrillator, it can be used as a lethal melee weapon.

A render of the syringe in BC2: V

The Syringe being used.

Short
"Heal up your teammates to full health, and a little bit extra."

Two variants of the syringe are featured in Battlefield Heroes for the Soldier: Dr. Ned's Needle and Dr. Siegfried's Syringe for the Royal and National Army respectively. Both syringes are identical and perform the same functions. Once activated, a nearby ally will be healed 24 health points, with all successive hits healing up to 12 health points. If a player already has full health, the syringe will grant yellow shield over the player and holds an additional 30 health points. This will also make Commandos who have the Stealth ability visible to enemy players.

The syringe also features the "Hey! I'm here and I can heal you!" emote to notify other players of the player's ability to heal.

The Adrenaline Shot is a gadget featured in Battlefield Play4Free. It restores an amount of health. It costs 225

for 100 uses. It is similar in purpose to the medkit and Field bandages. However, the effect is instantaneous rather than gradual, making it better for healing in-combat than the other two healing gadgets. Without the improved health skill unlocked from the training menu, a single adrenaline shot has the potential to heal 50HP, and has a cooldown timer of 60 seconds, which does not reset by dying.

The Advanced Adrenaline Shot is a variant that heals 60HP instantly with a 65-second cooldown.

Render of the Adrenaline Shot.

Render of the Advanced Adrenaline Shot

The adrenaline shot in the game menu.

Moderate (on allies)
Low (vs enemies)

This item has a Codex entry: Syringe

"An adrenaline injection that can be used to revive downed allies or kill enemies. Charge up the syringe to kill enemies."

The Medical Syringe is an available gadget featured in Battlefield 1 for the Medic kit. Similar to its use in the Bad Company 2: Vietnam expansion, the Syringe is used to revive downed teammates. It has no effect on active teammates.

When a teammate is downed, a skull icon (colored blue for ally, colored green for squad) will appear above his head. The time remaining to revive him is represented by a draining circle surrounding the skull. After emptying, there are about 3-5 seconds left to revive the player before they cannot be revived anymore and are sent back to the Deploy screen. If the skull is flashing, the player may be skipping revive, and will disappear in 3 seconds.

To revive, the medic must simply stab him with the syringe. No charging is required, allowing for a rapid revive. There is a delay before the user may revive another downed teammate; this delay can be shortened if an Ammo Crate is placed nearby.

Revived players are fully healed and recover to the prone or crouching position, depending on surrounding space. If the player is killed too soon after reviving (estimated to be around 10-15 seconds, or after the revived player earns a kill), they will not be revivable and can immediately skip to the deployment screen. After the penalty period, a killed player may be revived again. Players that can be revived will see the "Next Deployment" option filling, and are shown the distances of friendly medics (capable of reviving the player) on the left side of the HUD.

When a teammate is down, a medic may spot the skull icon to alert the downed teammate that they seek to revive them. The downed teammate will receive a voice signal on their killcam, and the name of the medic will be moved from friendly medics into another list above it named incoming medics.

The syringe is also capable of killing enemies if sufficiently charged, similar to the Battlefield: Bad Company 2: Vietnam variant. This is far less reliable than a melee weapon, however, as it will not always register hits on enemies. An early patch restored damage scaling, allowing the syringe to inflict less-than-lethal damage if it is not fully filled.

Notably, damage from the syringe completely ignores body armor. It is possible to use the syringe for an easy one-hit-kill on Elite Classes.

"An adrenaline syringe that can be used to revive downed allies." 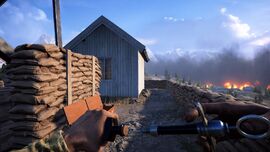 The Syringe is a gadget featured in Battlefield V for the Medic, used to revive teammates. Like the Repair Tool for the Support, the Syringe does not take up a gadget slot and is carried by the Medic class at all times. When using the gadget an animation is played where the Medic injects the downed player and helps them to their feet. The process is quicker than when helping squadmates with the Buddy Revive, but is considerably slower than revival in previous Battlefield titles.

Wounded players can call for a medic and delay bleeding out by using the Zoom button. There is a delay between when a player becomes wounded by damage, and when their revive window begins. A revive can be cancelled at any time by pressing any other keys.