Syringe is a Codex Entry featured in Battlefield 1. It is unlocked upon performing five revives with the Syringe.

THE EVOLUTION OF MEDICINE[edit | edit source] 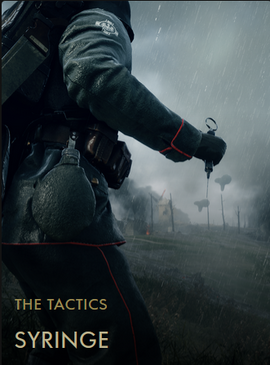 The Great War produced wounds that no doctor was used to treating, not only from shrapnel and bullets, but from poison gas, flamethrowers, and high explosives. Even a broken leg in no man's land was often a death sentence, and open wounds often became infected, with amputation as the only option.

As the war progressed, however, new inventions and techniques saved many lives; mobile X-ray machines and laboratories detected more quickly the extent of the wounds, while hygiene was improved with new forms of antiseptics and bandages made with the newly invented Cellucotton. Blood banks were created in 1917 and, in conjunction with sodium citrate, which prevents blood from coagulating, allowed transfusions and better shock treatments.

Retrieved from "https://battlefield.fandom.com/wiki/Syringe_(Codex_Entry)?oldid=343258"
Community content is available under CC-BY-SA unless otherwise noted.