T.E. Lawrence is a Codex Entry featured in Battlefield 1. It is unlocked by killing one of the officers with a melee attack in the chapter Young Men's Work of the singleplayer mission Nothing Is Written. 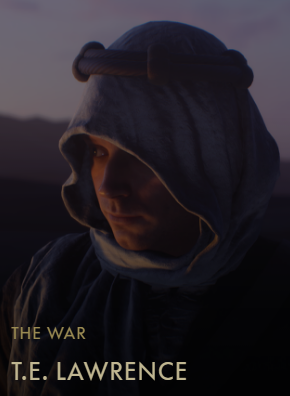 Thomas Edward Lawrence was sent to Palestine by the British Foreign Office before the war, where he studied the customs and the culture of the Near East. In December 1914, he was assigned to Cairo as the British Army secured the Suez Canal against the constant threat of an Ottoman offensive in the region. His job was to create a survey of the Palestinian countryside and to collect maps for the war in the Middle East.

He also supervised the encoding and decoding of telegrams that were sent between Athens, Gallipoli, Petrograd, and Cairo. Soon he became involved in secret negotiations with the rebellious Bedouins, and provided British guns and gold to the Rebels.

Lawrence later became a personal friend and adviser of Faisal, the son of Hussein bin Ali, the leader of the Arab Revolt. The British officer exchanged his khaki dress for the traditional garb of the Arabs. He accompanied the rebels throughout the war during their attacks on Ottoman outposts and the Hejaz Railway.

Disillusioned by the backdoor politics of his own government, Lawrence departed the Middle East shortly after the Revolt captured Damascus.

His story was romanticized by the press of the day, granting him celebrity status that he later sought to evade.

Lawrence is a figure shrouded in controversy. Some accuse him of being a British spy on a mission to raise an army for British interests. Others believe he genuinely cared for the Arab people and point to his involvement in the region before the war - and his efforts to aid Arabs in the peace talks after the war.

His unexpected death at the age of only 46 only increased his mystique. There is much that will never be known about the man, but his legend endures.

Retrieved from "https://battlefield.fandom.com/wiki/T._E._Lawrence_(Codex_Entry)?oldid=343399"
Community content is available under CC-BY-SA unless otherwise noted.