The Rocket Launcher T34 was a tank-mounted multiple rocket launcher used by the United States Army during World War II. Developed in 1943, the arrangement consisted of 60 4.5 in (114mm) M8 rocket launch tubes attached to the turret of an M4 Sherman using a metal frame, which allowed the system to be aimed horizontally and vertically. The system acquired the nickname Calliope as the cluster of tubes is visually reminiscent of the so-named musical instrument, also known as the steam organ.

The Sherman with T34 Calliope (referred to as T34 Calliope or Sherman T34 in the tooltips and Killfeed respectfully) is a multiple rocket launcher featured in Battlefield 1942: Secret Weapons of WWII. This variant of the M4 Sherman appears only on the expansion pack's maps. The Calliope essentially combines the armor of a tank with firepower of a self-propelled artillery piece. The driver has access to the same weapons as the normal Sherman, while the passenger utilises the rocket system, which has a high rate of fire, potentially allowing devastating amounts of damage. However, unlike standard M2 Browning, the launcher can only rotate 60 degrees, making the gunner heavily reliant on the driver's positioning of the turret. It also has very high recoil, and when it and main cannon are rapidly fired at same time accuracy is thrown completely off target.

The Sherman Calliope is a vehicle featured in Battlefield V.

A single T34 Calliope appears alongside regular M4 Sherman gun tanks in the singleplayer prologue My Country Calling, during the section set in Libya in 1941. The enemy tank shoots rockets at the player, although like the Staghound armored cars seen in the same set piece, it can be destroyed in a single hit from Müller's Tiger I.

Multiple T34 Calliopes can be encountered in The Last Tiger as enemy vehicles.

A T34 Calliope encountered in The Last Tiger 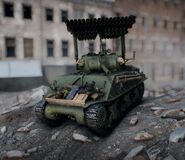 Sherman Calliope as seen in the Battlefield V – War in the Pacific Official Trailer.
Add a photo to this gallery

The T34 Calliope (alternatively the Rocket Barrage Tank) is a Squad Reinforcement featured in Battlefield V for 20,750 requisition points. It was introduced in Tides of War chapter 5, War In The Pacific. A variant of the M4 Sherman medium tank, it is the counterpart of the Imperial Japanese Army's Rocket Barrage Tank.

Front view
Add a photo to this gallery

Retrieved from "https://battlefield.fandom.com/wiki/T34_Calliope?oldid=372025"
Community content is available under CC-BY-SA unless otherwise noted.