Battlefield Wiki
Register
Don't have an account?
Sign In
Advertisement
in: Standard, Pistols, Sidearms of Battlefield Vietnam,
and 2 more

The TT-33 is an improved version of the Soviet 7.62x25mm Tokarev TT-30 semi-automatic pistol designed in 1933 by Fedor Tokarev. The TT-33 was designed to replace the Nagant M1895 revolver. The TT-33 drew from several Browning-made pistols, most notably the M1911 and FN M1903, but had numerous alterations to the designs, including a simplified hammer assembly and locking lugs all around the barrel; the handgun was also originally chambered in the 7.62 x 25mm Tokarev round as opposed to .45 ACP or 9mm of other European handguns. It was widely used by Soviet troops during World War II, though not in adequate numbers to totally push out the M1895 Nagant, and the design was copied by other Communist nations. The weapon is renowned for its durability. It was later phased out in favor of the Pistolet Makarova, in 1951.

Damage drops off after 20 meters to 40 meters

.2 (minimum deviation)
Does not affect spread (standing, crouching or prone)

TT33
In Battlefield Vietnam, the TT-33 is the standard pistol issued to the North Vietnamese Army and Viet Cong factions. It features an 8-round magazine, medium recoil, low damage multipliers, average accuracy, a 4-second reload, and a firecap of around 540 RPM. It can kill in up to 2-3 shots. It can be used in medium to long range combat, as its cross hairs can be small enough to effectively hit an enemy at long range. Although, the TT-33's awkward recoil and deviation can make a moving target very hard to kill at longer ranges. Compared to the American and South Vietnamese M1911, the TT-33 and the M1911 have identical stats with the exception of magazine capacity. Where the M1911 has one extra round in the magazine compared to the TT-33.

[1]
"This Russian made 7.62 caliber pistol was designed in the 1930s and was the main sidearm for the Red Army during WWII. It's renowned for its accuracy and ruggedness."

In Battlefield: Bad Company 2: Vietnam, the TT-33 is one of the two selectable sidearms. It features a 12-round magazine, a high rate of fire and moderate power. It is the equivalent of the M9 from the base game, and even has exactly the same stats and most of the same sounds as the M9, though the sound for racking the slide is much different.

Its iron sights, in most aspects, are very favorable, as players need only to aim with the very prominent and thin front post, which is very ideal for pin-point accuracy and easy aiming. 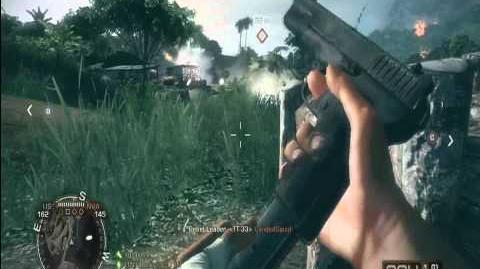 TT33
Gameplay with the TT-33 in Battlefield: Bad Company 2: Vietnam at Operation Hastings in Conquest mode