Takedown is a feature in the Battlefield series. When using Melee Attack on an enemy, a special melee takedown animation may play if conditions are fulfilled, locking both the attacker and the victim in place. If the animation plays out successfully, the victim will die instantly, and the attacker will claim their dogtags. 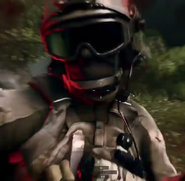 The player counters an enemy, killing him.
Add a photo to this gallery

For melee weapons (excluding the bayonet), takedowns occur any time that a melee weapon would inflict lethal damage on an opponent, although rear and prone takedowns can be performed on enemies at any health. The takedown health threshold and the takedown detection range varies depending on the weapon class.

Retrieved from "https://battlefield.fandom.com/wiki/Takedown?oldid=322055"
Community content is available under CC-BY-SA unless otherwise noted.