Tank Crews is a Codex Entry featured in Battlefield 1. It is unlocked by riding in tanks in multiplayer for thirty minutes. 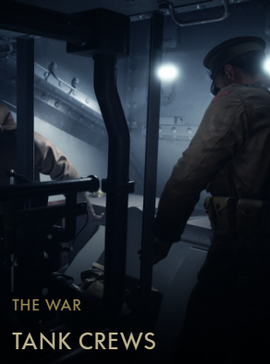 A tank in combat usually carried between 5 and 12 (the A7V up to 20) crewmen, who had different roles inside the machine. There was a commander and at least one driver, an observer, a main gunner, and machine gunners. It was hot inside the tank and the crew suffered from toxic fumes, gasoline smoke, carbon monoxide, and the lack of fresh air. The noise made by a simple gear change was so loud that it caused immense pain and the temperatures could reach over 40 degrees Celsius. Tank crews wore chain mail masks which protected them from pieces of their own tank when armor-piercing bullets or explosives weapons shattered steel plates. The early tanks were comparatively vulnerable and once cracked, there was often no escape for the trapped crew.

Retrieved from "https://battlefield.fandom.com/wiki/Tank_Crews_(Codex_Entry)?oldid=343311"
Community content is available under CC-BY-SA unless otherwise noted.