Tank Shock is a Codex Entry featured in Battlefield 1. It is unlocked upon collecting all Field Manuals in the Over the Top chapter of Through Mud and Blood. 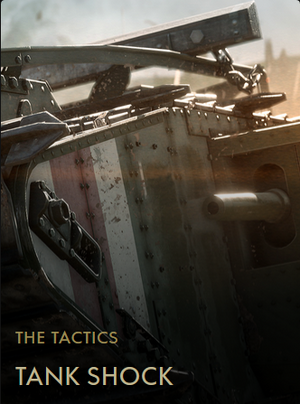 The development of the tank was top secret. The basic idea was that, like armored cars, they should provide a high level of security against bullets and shrapnel. However, instead of relying on vulnerable wheels, they would use new developed caterpillar tracks to cross no-man's land. Not only did the caterpillar tracks allow for much heavier armor, they were able to cross shell holes, gaps, and mud without getting stuck.

Unstoppable in the face of natural obstacles, they would break through the enemy's trench system and make way for the infantry to follow in their wake - at least in theory. That was because in reality, the first tanks were highly fragile machines and most of them broke down due to technical issues before they were even involved in combat. They were slow, cumbersome machines at first; only able to advance at a walking pace, and manning a tank was a hellish job. Gasoline fumes, carbon monoxide, extreme levels of heat and noise - many crew members couldn't operate a tank for more than a few hours, but with time the tanks became more and more sophisticated.

The iconic British Mark IV or the French Renault FT were close to the modern understanding of the tank. Able to endure withering enemy fire, they would act as mobile shields for the infantry or fire their cannons at the enemy's strongpoints. At the battle of Viller-Bretonneux, the first tank-vs-tank battle in history, several A7Vs fought a short engagement against three MK IV, losing to superior British firepower and mobility.

In the end, tanks were not the one decisive weapon of the war, but they were highly valuable assets when combined with infantry, artillery, and airplanes. War plans for 1919 included the mass deployment of tanks on the Western Front. Fortunately this did not come to pass.

Retrieved from "https://battlefield.fandom.com/wiki/Tank_Shock_(Codex_Entry)?oldid=343377"
Community content is available under CC-BY-SA unless otherwise noted.