Tanks in the Desert is a Codex Entry featured in Battlefield 1. It is unlocked by killing one of the three military officers with a tank in the chapter Young Men's Work in the singleplayer mission Nothing Is Written.

An FT-17 can be found on this mission inside the ruins and can be used to unlock this codex. 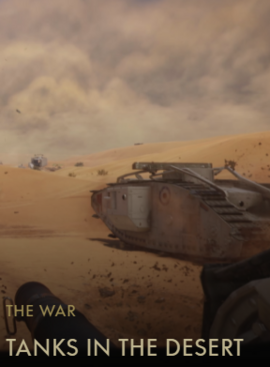 To fight in the deserts of Persia and the wide plains of Palestine often meant charging over open, coverless ground. A single machine gun in Ottoman hands was able to stop the advance of a whole British company.

Cities like Gaza or Baghdad were modern fortresses, with long trench lines and fierce defenders that stopped every conventional frontal advance. Tanks and armored cars were able to act as mobile cover, a shadow in which infantry could advance. Unlike no man's land on the Western Front, here tanks bearing names like Pincher, Sir Archibald, and War Baby had room to maneuver and use the speed of their engines to the fullest.

Retrieved from "https://battlefield.fandom.com/wiki/Tanks_in_the_Desert_(Codex_Entry)?oldid=343400"
Community content is available under CC-BY-SA unless otherwise noted.