Near the Caspian Sea

Taraba Quarry is a map featured in Battlefield 2: Euro Force. It features a relatively flat, open landscape with large amounts of armored vehicles provided to both teams.

The EU forces are en route to reinforce an American division that has been cut off from the front lines. The MEC have moved to intercept them, and both armies are about to meet at the Taraba Quarry, the only crossing point of the Taraba River this side of the Caspian Sea. If the MEC can hold their side of the river, the Americans will be cut off and surrounded. The EU must break through the enemy lines before the Americans are overrun.

There are five bases, three of which are controlled by the European forces at the start of a match, while one is held by the Middle Eastern Coalition, and the final one being a neutral point. The MEC's main advantage is its uncapturable primary base, although the EU begins with a lot more assets at its disposal.

The primary European base, the EU spearhead camp is the southernmost point on the map. It is where all commander resources spawn -- artillery, the satellite scan, and the UAV all spawn there. Further while it remains under EU control, it will spawn the majority of the EU's armored assets: two Leopard 2 and Challenger 2 main battle tanks, an LAV-25 armored personnel carrier, two DPV and Humvees. Additionally, seven defensive emplacements spawn here: three TOW antitank launchers and four M249 light machinegun emplacements.

If it falls into MEC control, a similar array of materiel will spawn—four T-90 main battle tanks, a BTR-90, two FAVs and two GAZ-3937 Vodniks, as well as their counterpart antitank emplacements and machinegun emplacements.

Located to the north of the EU Spearhead camp and south of the engineering compound, the EU forward outpost is one of the three points which start under European control. While under EU control, it will spawn one Leopard 2, one DPV and one Humvee. It will spawn two TOW launchers for defense, as well as three M249 machinegun emplacements. If it falls into MEC control, it will spawn a similar array of equipment; one T-90, one FAV, one GAZ-3937 Vodnik, two AT emplacements, and three RPK-74 machinegun emplacements.

The centralmost control point of the map and the final European-held starting point. It is a relatively large base divided in half by a large hill. While under EU control, the point will spawn one Leopard 2 and one Challenger II, as well as two DPVs and Humvees. For its defense, it spawns three TOW emplacements and M249 machinegun emplacements. If it falls into MEC control, the point spawns three T-90s, as well as two FAVs, and one GAZ-3937 Vodnik. The TOW and M249 emplacements are replaced by HJ-8 and RPK-74 emplacements, respectively.

The eastern part of the compound

The only neutral flag at the start of a match, it is a two-building capture point with a partial stone wall on one side, and a smaller shack on the eastern end. While under EU control, the point will spawn a single Leopard 2 and one Humvee. On the opposite side, when under MEC control it will spawn a single T-90 and GAZ-3937 Vodnik.

The northernmost base in the sixteen-player variant of Taraba Quarry, the Farm Community flag is an uncapturable point which serves as the MEC's starting base. Similar to its counterpart for the EU, it is the place where a majority of vehicle assets spawn, with four T-90s, one BTR-90, three FAVs, and one GAZ-3937 Vodnik. It plays host to all of the MEC's commander resources, and is defended via one HJ-8 antitank emplacement and one RPK-74 light machinegun emplacement.

This variant holds seven flags, three are neutral and two starting bases for both teams. one caputrable and the other one isn't capturable.

In terms of air assets, the base spawns two different jets: one F-15 and one Eurofighter Typhoon. For air defense it spawns one Stinger emplacement, and one M6 Linebacker.

View of the flag

View of the jets
Add a photo to this gallery

The second of the European starting bases, the Engineering Compound is divided in half by a large hill. While controlled by the European forces, the point will spawn one Leopard 2 and one Challenger 2, as well as two DPVs. For defense, it spawns two M249 machinegun emplacements. In a similar fashion, while under MEC control the Engineering compound will spawn two T-90s, two FAVs, and two RPK-74 machinegun emplacements.

The starting point for the Middle Eastern Coalition forces, this is where most of the MEC armor and commander resources are concentrated. It is the counterpart to the EU's Spearhead Camp, and as such is an uncapturable base.

The second of the MEC's starting bases, this is where the remainder of the MEC's armor is located. It consists of one large building and one smaller building; the latter is partially protected by a fence to the west and south. The entire point is across the street from a broken-down railcar, with several freight crates around the flag.

As long as it remains in MEC control, the flag will spawn two T-90s, two FAVs, as well as one HJ-8 antitank emplacement and one RPK-74 light machinegun emplacement. A similar assortment of equipment spawns if the point comes under EU control, although the two T-90s are instead replaced by one Leopard 2 and one Challenger 2.

The only neutral flag on the eastern side of the map, it is laid out in the same manner as the sixteen-player variant, although it is of more strategic importance due to its location near one of the only ground crossing points on the map, a bridge/dam. Regardless of who controls the point, it will spawn the relevant faction's equipment in the form of one anti-air LAV, two buggies, and two jeeps. Additionally, it will spawn a single faction-specific antitank, antiair, and light machinegun emplacement.

The only neutral flag on the western side of the map.

The northernmost flag, as well as the center-most flag. 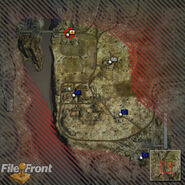 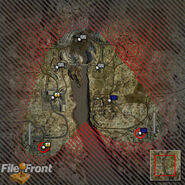 32 player variant.
Add a photo to this gallery

Retrieved from "https://battlefield.fandom.com/wiki/Taraba_Quarry?oldid=318902"
Community content is available under CC-BY-SA unless otherwise noted.