A Monocular is a modified refracting telescope used to magnify the images of distant objects by passing light through a series of lenses and usually prisms, the application of prisms resulting in a lightweight, compact telescope.[2]

Binoculars are two telescopes mounted side-by-side and aligned to point in the same direction, allowing the viewer to use both eyes when viewing distant objects. Most are sized to be held using both hands, although sizes vary widely from opera glasses to large pedestal-mounted models. Unlike a monocular, binoculars give users a three-dimensional image: for nearer objects the two views, presented to each of the viewer's eyes from slightly different viewpoints, produce a merged view with an impression of depth.[3]

In Battlefield 1942, Binoculars are issued to the Scout kit. They are used by the Scout to coordinate targets with allied artillery pieces so that they can fire on the target designated by the Scout. Binoculars also provide a helpful means of spotting targets at distance, such as enemy armor or soldiers.

In Battlefield Vietnam, Binoculars are issues to every kit except the Engineer in the game. They are used to spot enemy soldiers and vehicles on the field by looking at the target and pressing the fire key to spot them and warn allied players of the threat, as well as tracking their location for a few seconds on the minimap and all allied players' HUDs if they are in their field of view. This change to binoculars from their previous use was primarily implemented due to the fact that spotting in Battlefield 1942 was much more complex with using the function keys.

In Battlefield: Bad Company 2, Preston Marlowe uses Binoculars in the singleplayer campaign during Cold War, Heavy Metal and High Value Target to call in air strikes on a Russian T-90, four 9M133 Kornet positions and a ZU-23-2, respectively. Preston and Sergeant Redford later seen using Preston's binoculars during a cutscene as Bravo Two looks over the Battle of Medellín in Zero Dark Thirty, just before the Scalar Weapon is tested. In-game, they can be accessed with the Q/Select/Back buttons for PC, PlayStation 3 and Xbox 360, respectively. 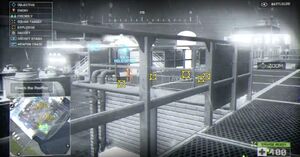 Binoculars are a gadget featured in Battlefield 4.

The Tactical Visor, also referred to as the Tactical Binos, is a gadget featured in the Singleplayer Campaign of Battlefield 4]. It is used by holding Spot/Commorose. It can be used to mark all enemies within its sight as well as explosive objects. Mission objectives and weapon crates will also be displayed.

The PLD functions in a similar manner to binoculars. Their main purpose, however, is for laser designation.

Two telescopes are featured as gadgets in Battlefield 1: Binoculars and Trench Periscope.

A set of binoculars is available during the singleplayer campaign, serving much the same purpose as in Battlefield 4 campaign.

"A scope that can be used to look across cover safely and to mark enemies for your squad mates.

The Trench Periscope is a gadget issued to the Scout and Tank Hunter kits in Battlefield 1.

Taking the form of a pair of periscope binoculars, the gadget's primary use is to spot enemies with a red outline, making them conspicuous targets. In addition, an indicator at the bottom-right corner of the scope allows the gadget to act as a rangefinder, showing the distance in meters to the subject in the central crosshair. Uniquely, the periscope allows for observation when in cover, or to see over obstacles at head-height.

The gadget produces scope glint, and does not indicate if the user has inadvertently exposed themselves.

The Gas Mask prevents use of the Trench Periscope while the player is wearing it.

Trench Periscope in the hands of a Scout.

ADS with the Periscope.

Two telescopes are featured as gadgets in Battlefield V: the Spotting Scope and Binoculars.

Automatically spots enemy players
"Spot enemies and share their positions with your teammates."

The Spotting Scope (alternatively named the Spyglass and M49 Spotting Scope) is a gadget featured in Battlefield V for the Recon kit. Due to changes in spotting from previous installments, the scope and certain Combat Roles are the only means to spot enemies. While looking through the scope, enemy players and vehicles are automatically spotted with icons for a short amount of time. Additionally, the scope will display the range of enemies from the player's position. The scope does not produce scope glint.

The various smoke gadgets and vehicle specializations prevent any screened players from being spotted, and removes active spots on players that pass through.

Raising the spotting scope and covering the left eye

Binoculars are available to squad leaders as part of the Squad Reinforcement system. They are used to mark a drop location (visible as a yellow dot and circle) for certain reinforcements including Supply Canister Drop, V-1 Rocket, JB-2 Rocket, Sector Artillery and Smoke Barrage. As such, reinforcements are limited to areas visible to the squad leader while they are active in field.

The target area need not be outdoors—some reinforcements can pass through small gaps, and others can destroy overhead cover or small buildings.

Binoculars also return in the singleplayer campaign while on foot, serving a similar role as in past campaigns.

An Intel Scanner is provided to players in Battlefield 2042's Hazard Zone gamemode. These show the location of Data Drives within the map, and assets such as Supply Stations.