Terni Armored Car is a Codex Entry featured in Battlefield 1. Detailing information about the F.T Armored Car, it is unlocked by obtaining twenty kills with Armored Cars. 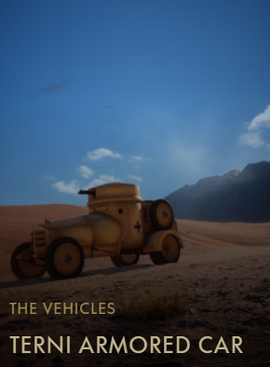 Manufactured at the end of 1918, and designed to be used in the Italian colonies where it proved itself valuable as a scout car. It was a simple, robust machine using proven chassis and engine designs. It was also somewhat smaller compared to other armored cars. It featured a water-cooled heavy machine gun in the turret, similar to other cars. It also saw action in Libya during the Second World War.

Retrieved from "https://battlefield.fandom.com/wiki/Terni_Armored_Car_(Codex_Entry)?oldid=343290"
Community content is available under CC-BY-SA unless otherwise noted.