"Sweetwater: Hey, I just brought that bitch down on a quarter of a dime, so a little respect!
Haggard: Very little!"

— Sweetwater and Haggard, bickering after Sweets brings the satellite down and adding the disclaimer that "Now we have to get inside that thing."

He is part of the squad consisting of Redford, Haggard, and Marlowe. He uses a light/medium machine gun, serving as the fire team's automatic rifleman. He is often picked on by Haggard and is treated like his younger brother; they often play rock-paper-scissors together.

Terrence is transferred into Bad Company for uploading a virus onto the military mainframe. He often tries to flirt with Mike-1-Juliet. Even though he carries the largest weapon, Sweetwater is the most cautious member of the squad often pointing out the enemy's superiority in numbers and equipment. He also seems to be the most intelligent of the squad, besides Sergeant Redford. 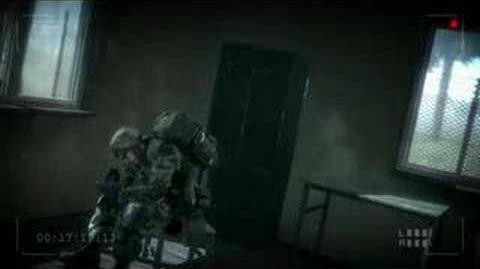 Sweetwater in Battlefield: Bad Company 2.
Add a photo to this gallery

Retrieved from "https://battlefield.fandom.com/wiki/Terrence_Sweetwater?oldid=371410"
Community content is available under CC-BY-SA unless otherwise noted.