The A7V Tank is a Codex Entry featured in Battlefield 1. It is unlocked upon obtaining ten kills with the A7V Heavy Tank. 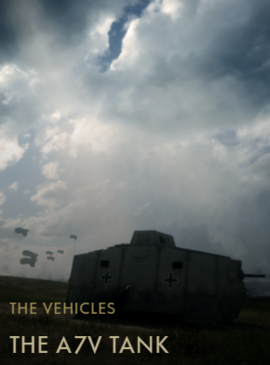 Despite initial skepticism against tanks, by 1917 the German high command decided to build their own tank. Nicknamed "The Moving Fortress" by the British, the A7V saw action around St Quentin during the Kaiserschlacht. Its thick armor and its central main gun were superior to the British tanks in some confrontations.

The engine was more powerful than the British tank and it could reach a higher top speed, but it took seventeen men to operate the tank and all its defensive positions.

One has to remember that the Germans still used more captured and converted British Mark IV tanks, also referred to as "Beutepanzer", than all of the 22 A7Vs that had been built.

Retrieved from "https://battlefield.fandom.com/wiki/The_A7V_Tank_(Codex_Entry)?oldid=343267"
Community content is available under CC-BY-SA unless otherwise noted.