The Adriatic is a Codex Entry featured in Battlefield 1. It is unlocked upon winning any gamemode on the map Empire's Edge. 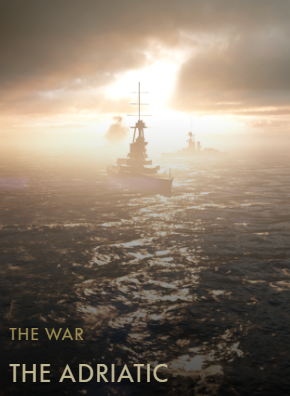 Once Italy joined the war, the Italian and Austro-Hungarian navies faced each other across the Adriatic Sea in a deadlock. The Italian navy was superior in numbers and quality, but the Albanian and Dalmation coastal harbors were better fortified and easier to defend.

Both sides concentrated their strategies on fast torpedo and gunboat battles. Highly mobile, and able to threaten either navy attempting to leave the harbor, they inflicted heavy damage using these raider tactics.

Italy developed the MAS, the anti-submarine motorboat. Made of plywood and only useful in calm water, they were still faster than any other warship and carried depth charges, torpedoes, and mines. Submarines harassed unwary steamers, and seaplanes and torpedo boats harassed submarines.

There were coastal raids back and forth on both sides, but it was the Allied naval blockade of the Adriatic that perhaps had the strongest effect on this front. It effectively halted Austrian shipping and prevented them from adequately resupplying their Empire which exacerbated their food and materials crisis as the war dragged on.

Retrieved from "https://battlefield.fandom.com/wiki/The_Adriatic_(Codex_Entry)?oldid=343324"
Community content is available under CC-BY-SA unless otherwise noted.