A makeshift vehicle is a vehicle that is produced from the assembly of unconventional items and has a means of steering and gaining momentum. Furniture such as couches can also be converted into makeshift vehicles with the addition of wheels, and are usually pushed down hills or roads to gain speed. They can also be equipped with a motor to be self-propelled, with one recorded instance of a motorized couch traveling at a speed of 101 miles per hour.[1]

The American Dream, (called MERICA in the killfeed), is a hidden vehicle in Battlefield Hardline. It is a couch with four wheels underneath that can be driven by a player and can seat three other passengers. It is found on the map Dust Bowl during the Hotwire gamemode.[2] It spawns in one of three random locations across the map.

The American Dream is the fastest land vehicle in the game, and handles similarly to the Dirt Bike. This allows the couch to perform high-speed jumps and easily roadkill other players. However, the couch offers no protection for its users, who are completely exposed to gunfire, and is very vulnerable to explosives. The couch also spawn once per match, after it is destroyed, it will not reappear for remainder of the round. If the player wants to continue using it, then it is important to keep out of large firefights and away from heavier attack vehicles. The driver should make use of its high speed to perform hit-and-run attacks on enemies. Having a passenger equipped with the Repair Tool will also be useful for keeping the couch up and running.

The "driver" sits on the left-side (from the back) cushion of the couch with his hand on the armrest, the second passenger sits on the right-side cushion with his left leg resting on his right knee, the third sits on the headrest, and the fourth sits on the right armrest. Like other vehicles, the passengers are free to use their personal equipment while the driver remains unarmed. The couch can be repaired with the Repair Tool.

A Banger Enforcer and Professional riding The American Dream on Dust Bowl. 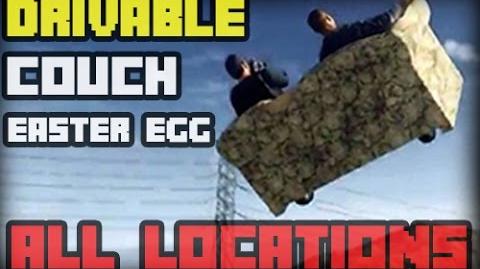 Retrieved from "https://battlefield.fandom.com/wiki/The_American_Dream?oldid=358374"
Community content is available under CC-BY-SA unless otherwise noted.