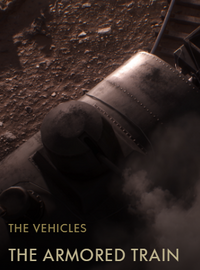 This particular mechanical beast, the Zaamurets, had two 57mm gun turrets and eight machine guns for protection in Galicia for the Russians, and later saw action with the Czechoslovak Legion where it was renamed "Young Eagle", until it was eventually captured by the Japanese in Siberia. It lived past the armsistic in 1918 and fell into many different hands in the remnants of the Russian Empire. Its ultimate fate remains unknown, and there are plenty of legends surrounding it.

Retrieved from "https://battlefield.fandom.com/wiki/The_Armored_Train_(Codex_Entry)?oldid=343271"
Community content is available under CC-BY-SA unless otherwise noted.