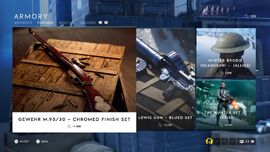 The Armory is the in-game store featured in Battlefield V. The store highlights new cosmetic items from The Company. These are listed as featured items, weapons, and soldiers outfits which can be purchased with Company Coin and Battlefield Currency. Items featured are rotated out after a set time period, with the store contents usually refreshing on Tuesday every week. Items featured in the Armory, except Epic rarity items, may also be purchased in the Company.

The Armory is separated into various tabs for the purchasing of featured, elite, weapon and soldier customizations as well as Shipments and the in-game currency store. The Shipments tab allows players to claim awarded weapons and cosmetics after completion of assignments, career and class progression or weekly Tides of War challenges. These items must be claimed in the Armory before they become accessible for use in the Company. The Store tab allows the purchasing of premium currency denotations as well as Starter Packs.

Soldiers Tab
Add a photo to this gallery

Retrieved from "https://battlefield.fandom.com/wiki/The_Armory?oldid=366059"
Community content is available under CC-BY-SA unless otherwise noted.