The Bedouin is a Codex Entry featured in Battlefield 1. It is unlocked by obtaining the book without being detected in the chapter Hidden in Plain Sight in the singleplayer mission Nothing Is Written. 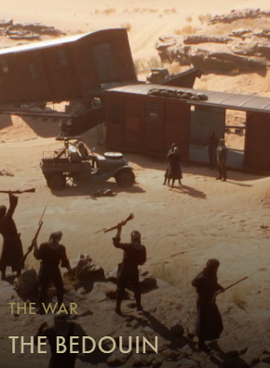 The Bedouin of the era traditionally lived in the harsh environment of the deserts of the Middle East. They were courageous, fearsome fighters, who were not fond of living under the rule of the Ottoman Empire. Open revolt was declared on June 8, 1916 under Sharif Hussein bin Ali and his sons, who sought a unified Arab nation.

With the guidance of T.E. Lawrence ("Lawrence of Arabia"), British rifles, artillery, and a lot of British gold, the Arab Revolt recruited thousands of Bedouins to fight the Ottoman army.

The had neither the military training nor the tactical knowledge to fight a modern Ottoman force head on. Instead they waged a bloody guerrilla war. Sabotaging the important Hejaz Railway and storming weakly defended Ottoman outposts and supply stations; they fought a war of movement and surprise.

Retrieved from "https://battlefield.fandom.com/wiki/The_Bedouin_(Codex_Entry)?oldid=343397"
Community content is available under CC-BY-SA unless otherwise noted.