The Big Guns is a Codex Entry featured in Battlefield 1. It is unlocked upon calling in the offshore barrage in the chapter Cape Hellas of the singleplayer mission The Runner. 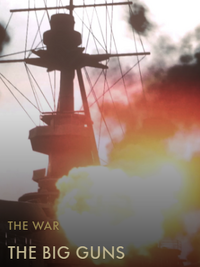 Naval bombardment were used to support amphibious operations, disrupt enemy coastal supply parts, or simply destroy fortifications within reach of massive guns. The First World War saw naval operations all over the Belgian and Adriatic coastlines, sea raids against Riga and Scarborough, and amphibious assaults at the Dardanelles. The biggest disadvantages were the low angle of the naval guns and their flat trajectories, which made indirect fire impossible, since they couldn't reach positions in the shadow of hills.

Retrieved from "https://battlefield.fandom.com/wiki/The_Big_Guns_(Codex_Entry)?oldid=343416"
Community content is available under CC-BY-SA unless otherwise noted.