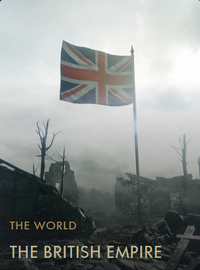 A quarter of the world was controlled by the British Empire in 1914, and the colonies were secured by Britain's supreme naval power. The British army at the time was quite small compared to the other European powers, but it was the only fully professional regular army in Europe and the soldiers were crack troops despite their small numbers. Fearing the expansion of German influence, Britain guaranteed Belgium's neutrality, meaning that an attack on Belgium was an attack on Britain, and all corners of the global Empire would join the fight.

Retrieved from "https://battlefield.fandom.com/wiki/The_British_Empire_(Codex_Entry)?oldid=343226"
Community content is available under CC-BY-SA unless otherwise noted.