The claw allows those who have never spent money on the game to obtain a great amount of unlimited items if they use their turn constantly. A step forward to reward loyal players more beside the tiny daily mission

Additional rounds cost now 599 Play4Free Funds, which neither influence the free claws nor have different chances.

With the currency change on 19th December 2012, the extra round was available for 1500 Valor Points, and shortly after adjusted to 1000 VP.

25th January 2012: The claw get's a feed to see follow the spins of all players.

15th February 2012: The claw now marks unlimited items with a *Star* on the top left corner. The claw now allows the player to select the speed of the claw, allowing the player to get a reward instantly without wait time or select when the claw stops themselves. Green indicates that the claw will instantly give you your reward, while Red indicates that you can choose when the claw stops.

18th December 2012: The claw ticking sound does not continue to play after closing the claw anymore.

19th December 2012: All store items were put in the store, this includes permanent weapons, clothes, all widgets and weapon customization. Though this was done to decrease the pay-to-win accruals, the chance and amount of tonics, wrenches and fire proof underpants was drastically reduced in favor of the massive amount of clothes. Furthermore no official data was given how the chances between time limited and permanent items were settled. Finally the weapon add ons aren't available by VP anymore, so the argument of reducing the pay-to-win effect was pretty lame. It really has a very positive influence on the gameplay variation, but it wasn't worked out 100%. 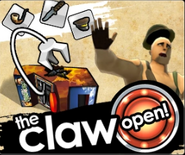 The very first claw widget at the frontpage 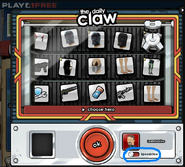 New feature that allows the player to adjust the speed of the claw. 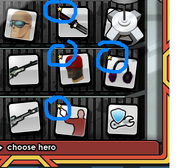 Retrieved from "https://battlefield.fandom.com/wiki/The_Claw?oldid=367480"
Community content is available under CC-BY-SA unless otherwise noted.