The Dardanelles is a Codex Entry featured in Battlefield 1. It is unlocked upon completion of the singleplayer mission The Runner. 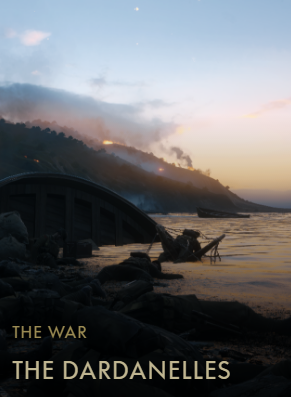 The Dardanelles and the Gallipoli Peninsula guarded the entry to the Sea of Marmara. Controlling the straits would not only open up a connection to Russian naval forces operating in the Black Sea, it would drive a wedge between the Central Powers and their Ottoman ally. A direct link between Russian and British forces may finally persuade Greece and Romania to join the Allies and ultimately help defeat the Ottoman Empire, it was thought. Capturing Constantinople, many generals were convinced, would end the war in the Near East.

The Operation was under the leadership of the First Lord of the Admiralty, Winston Churchill. After initial attempts to destroy the Ottoman coastal batteries had failed, the Allied navies tried to break through the straits, but coastal artillery, defensive torpedoes, and large belts of mines caused devastation among the attackers, sinking and damaging many Allied battleships. It was then the task of the infantry to capture the Gallipoli Peninsula and destroy the Ottoman defenses by land.

Covered by the fire of mighty naval gun, the British and the assembled forces of the Australian and New Zealand Army Corps landed on the beaches and stormed the Ottoman defenses on the hills that overlooked them. But the landings on April 25th, 1915 had underestimated the capabilities of the defenders, and a barrage of artillery and machine-gun fire had a devastating effect on the emerging troops. The fighting at Gallipoli turned into a prolonged stalemate, as the British troops were unable to break through the Ottoman defenses under Mustafa Kemal. The battle was characterized by its small skirmishes, lack of strategy and leadership, and constant artillery and sniper duels.

Retrieved from "https://battlefield.fandom.com/wiki/The_Dardanelles_(Codex_Entry)?oldid=343433"
Community content is available under CC-BY-SA unless otherwise noted.