The Empires Best is a Codex Entry featured in Battlefield 1. It is unlocked upon obtaining 10 kills with Elite Class Weapons. 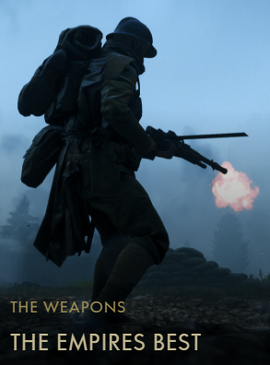 We might think of World War 1 as being a war of big armies moving according to an old plan that would never work, and that nobody did anything to change that, but nothing could be further from the truth. Alpine Hunters, shock troops, Strike/Grenadier Battalions and many other types of units fought with uniquely developed tactics for special strikes both in the trenches and beyond.

With the French Blue Devils, The Italian Arditis, and the German Stormtrooper using radical Hutier infiltration tactics, a new aggressive combat style saw the light of day during the Great War.

This revolutionary approach to warfare was a clear departure from the costly practice of using mass infantry for frontal assaults. Stormtrooper attacks usually began with a smaller but violent artillery barrage concentrated on a smaller point rather than a wide front, after which the Stormtroopers did a rapid assault across no man's land, taking key positions and continuing beyond the trench lines to create confusion and paralyze the enemy in the rear. In many cases, this was then followed up by regular infantry sent forward to secure the captured territory.

Retrieved from "https://battlefield.fandom.com/wiki/The_Empires_Best_(Codex_Entry)?oldid=343178"
Community content is available under CC-BY-SA unless otherwise noted.