The FT Tank is a Codex Entry featured in Battlefield 1. It is unlocked upon obtaining 10 kills with the Renault FT]. 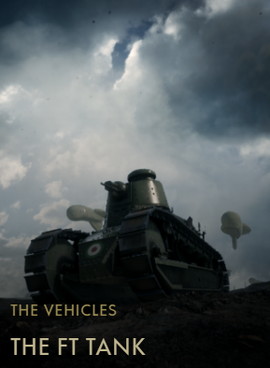 Perhaps the best tank of the war, and the model that shaped designs for future tanks. A small tank with a turret that could exploit breakthroughs and came equipped with a 37mm cannon or a machine gun. Built by the French but used by both French and American troops during the later parts of World War 1.

PERHAPS THE BEST TANK OF WAREdit

After world war one, the tank was exported to many countries around the world and some were fielded in World War 2.

Retrieved from "https://battlefield.fandom.com/wiki/The_FT_Tank_(Codex_Entry)?oldid=343269"
Community content is available under CC-BY-SA unless otherwise noted.