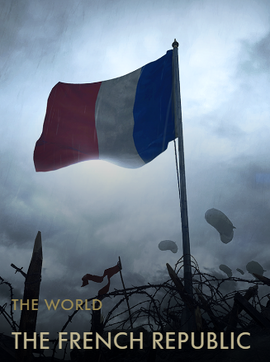 The French spirit, the "elan vital" of heroism on the battlefield, accompanied the mass infantry charge into the German advance in August 1914, but it was only the steadfast defense at the Marne that saved Paris. For many, that "miracle" spoke of French determination to withstand even the greatest foe, even after that foe had his boots buried deep into French soil. It became a battle for survival for its defenders as the German armies threatened the national symbol of Verdun. While the British always had the option of withdrawing to their island, for the French-soldier and civilian alike- it was a war for their homes and their soil, occupied and destroyed by their archenemies. So the French fielded more men than their allies, they suffered greater causalities, they pioneered tactics like the creeping barrage, they fielded mighty tanks and the first true air FORCE, and by the end of the war it was a Frenchman who commanded the Allied forces.

Retrieved from "https://battlefield.fandom.com/wiki/The_French_Republic_(Codex_Entry)?oldid=343228"
Community content is available under CC-BY-SA unless otherwise noted.