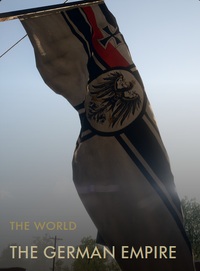 Germany, and especially Kaiser Willhelm II, dreamed of a greater colonial empire and a greater German hegemony in the concert of Europe. A big concern for Germany was the expansion of the Russian railway system. In 1914, German Chancellor von Bethmann-Hollweg stated that within three years, Russia would be able to mobilize troops so quickly that the German advantage in technology would not be able to overcome the Russian advantage in manpower. To win the war, they had to act quickly. What Germany feared was a war on two fronts, so their battle plan was to defeat France and then focus the entire German military might on the Russian Empire.

Retrieved from "https://battlefield.fandom.com/wiki/The_German_Empire_(Codex_Entry)?oldid=343157"
Community content is available under CC-BY-SA unless otherwise noted.