Police car, SUV
"The fourteenth of this month, when the sun is set...Solomon...will...strike."

The Great Destroyer is the final mission in the singleplayer campaign of Battlefield 3. The level reveals everything about Miller's execution and Blackburn's interrogation. Also, it continues the event occurred on the first mission, Semper Fidelis.

During the cut-scene, the two interrogators state that Solomon is actually a US asset and has been for years. The interrogators then proceed to bring Montes in the room and try to persuade Blackburn to falsely confess that it was Dima who planted the nuke in Paris and not Solomon. However, as the two men leave after receiving a call that a train has been hijacked, Blackburn looks at a poster board with a map and several pictures. As Blackburn is doing this, he also begins to hear various statements said by Agent Gordon, Al-Bashir, and several others, and puts them together. Blackburn then asks Montes what the time was on the train schedule at the Metropolitan Bank in Iran. Montes then states that the time was 6:02 PM on the schedule. Finally, Blackburn asks Montes if he trusts him. Montes simply replies, "Oh yeah", followed by the end of the cutscene.

When the two men (Agent Whistler and an armed guard) return from the phone call, Blackburn slams Whistler's head against the table and knocks him out. The other guard then begins to strangle Montes. Blackburn rips a leg out of the table and hits the guard over the head with it, also knocking him out. As the two escape the room and go into the hallway, several guards start shooting at them. The player must smash through the window at the end of the hallway by breaking the glass.

The player then moves through an alleyway and into the street. As police sirens wail in the distance, Blackburn sprints over to the fence overlooking the railroad tracks. There is one small section where there is no fencing. As the train roars by, Blackburn jumps onto the train. Despite a rough landing, he manages to hold on. The scene then cuts to a subway station, with Black crawling furiously on the roof of the train. (This is also the point where the player begins to control Blackburn in the story point of Semper Fidelis.) Blackburn then jumps feet first into a window, Blackburn encounters Solomon, wielding a .44 Magnum, which he uses to shoot at Blackburn. This causes him to slip and almost fall off the train. However, Blackburn proceeds to climb to the roof of the train. PLR operatives start shooting at him from out the windows. Blackburn moves up to the front car and busts in, only to be confronted by a guard and Solomon. Solomon initially knocks down Blackburn but Blackburn strangles the guard and then detonates the bomb located in the 2nd car, derailing the train.

Both Solomon and Blackburn escape the burning train into the sewers. After a short chase in the sewers, including multiple engagements against PLR operatives, Blackburn finds a ladder and climbs to the surface, in the middle of New York City. The fight proceeds out on the streets of New York. Montes arrives with a stolen police car and picks Blackburn up, chasing after Solomon. After a car chase, with Blackburn shooting at the car, the police car rams into Solomon's SUV and both Montes and Blackburn barely escape. Solomon then leaves his vehicle, and prepares to execute Blackburn. Montes tries to shoot Solomon, but is shot in the head, causing some onlookers to run in fear. As Solomon pulls the trigger, the cylinder is empty, and him and Blackburn then get into a fight. Solomon punches Blackburn several times, and Blackburn tries to strangle Solomon with his handcuffs. Unfortunately, Solomon pins him against the police car and brutally beats him. He then walks back to the nuke, with Blackburn falling to the ground. However, just seconds before Solomon detonates the nuke, Blackburn trips Solomon and beats him to death with a brick. Blackburn then finds the nuke, and disables it, putting an end to the nuclear threat.

Sometime later, Dimitri Mayakovsky is shown in his apartment, reflecting on all the events that occurred. He also reflects on his radiation poisoning from the nuke in Paris, and how he might live another 30 years, or die the next day. He also states that he has no regrets. However, by the same token says that Moscow does not view it in the same light as him. Dima then picks up a pistol and says a quote that Vladimir said, which was, "You can only die once. Make sure it is worth it." A knock is then heard at the door. The screen fades to black and the sound of Dima cocking the pistol is heard. It is unknown what he does after that, though he survives the event, as seen in Battlefield 4, locked up in a prison due to being falsely implicated in the Paris bombing. 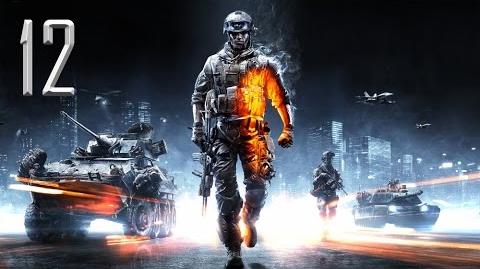 Retrieved from "https://battlefield.fandom.com/wiki/The_Great_Destroyer?oldid=375340"
Community content is available under CC-BY-SA unless otherwise noted.