The Hejaz Railway is a Codex Entry featured in Battlefield 1. It is unlocked by scouting the crash site with the binoculars in the chapter Hidden Plain Sight in the singleplayer mission Nothing Is Written. 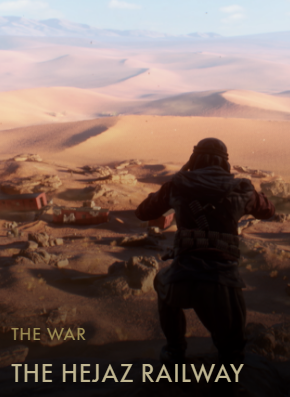 Initially constructed to transport pilgrims from Damascus in Syria to Medina in Saudi Arabia, the narrow 1050 mm-gauge railway soon became of vital military importance to the Ottoman Imperial Army. It quickly transported troops, artillery, and supplies to the battle zones of the Middle East and Palestine. Its military purpose made it a target for the guerrilla war of the Bedouins, who would sabotage the railway with explosive mines.

Ottoman troops were soon commissioned to protect the trains at all cost and the German Asia Corps even tried to secure the railway by providing fighter aircraft.

Retrieved from "https://battlefield.fandom.com/wiki/The_Hejaz_Railway_(Codex_Entry)?oldid=343396"
Community content is available under CC-BY-SA unless otherwise noted.