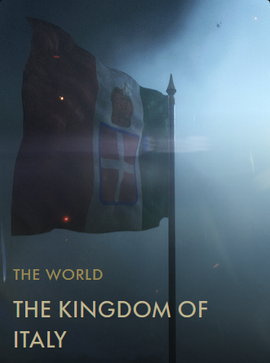 Italy had been an ally of Germany and Austria-Hungary before the war, but when it broke out in 1914, they claimed that the alliance was only a defensive one, and Italy had no obligation to join an offensive war. However, one year later, Italy joined the war siding with the Allies, hoping to reclaim "lost" Italian lands that were now part of the Austro-Hungarian Empire.

The Italian front was characterized by mountains. The amount of soldiers wounded compared to killed was far greater there than other front, because stray bullets would splinter the rock into deadly projectiles that were particularly dangerous to eyes and faces.

Retrieved from "https://battlefield.fandom.com/wiki/The_Kingdom_of_Italy_(Codex_Entry)?oldid=343221"
Community content is available under CC-BY-SA unless otherwise noted.