Letters
"In the twilight of WW2, the German Army descends into chaos. Under the command of a veteran officer, a lone Tiger tank crew begins to question the ideology that got them to this point."

The Last Tiger is the final singleplayer War Story featured in Battlefield V. The level has been released on December 5, 2018.[1]

The story follows a German Tiger tank crew in the final days of World War II on the Western Front, and how they begin to question the ideology that got them to this point.[2]

As the Allies broke through the German war machine at Normandy, Paris, Hurtgen, and the Ardennes by Christmas 1944, the Western Front begins to crumble. As the Allied offensive goes on, Tiger tank 237 has been redeployed to support the defense at the Rhineland urban areas, specifically in Cologne, Germany.

As they head for the Cologne cathedral, they see Germans branded as traitors as they were caught deserting the battle. As the Allies break through the city, Tiger 237, nicknamed Stefan, callsign Anton-One, is ordered by command to support Wehrmacht infantry and tanks in a railyard, breaking through Allied armor and infantry along the way. However, as they advance to the city center, artillery bombards German armor, prompting a change of orders to destroy the artillery and its defenses.

After the artillery had been destroyed, a counterattack was initiated by the Allies to attempt to entrap the German forces, this time with rocket barrages from Calliope tanks, but to no avail. Tiger 237 then continues heading to the railyard, but Hartmann insists on going back to the bridge due to panic of death, but the crew disagree and carry on with the mission. At a train station, the crew is on their own fending off enemy armored columns before proceeding. However, as they proceed, red smoke appears from the air, signaling an Allied aerial assault.

Allied air superiority targets the tank to be "busted". While they dodged all incoming fire, they quickly took cover in a ruined building, however, they could not stay for long. Kertz reported to Peter that someone must be sent out to scout the area for a way out, and Schröder convinced Peter to send out Hartmann, much to Kertz's disagreement. Hartmann got sent out despite Kertz's initial rejection to scout the area but disappeared in smoke. Not long after, the rest of the crew spotted the main Allied force consisting of tank divisions and infantry, which prompted them to escape in a hurry, leaving Hartmann's fate unknown for a while.

Their latest order was to head to a forward base to destroy all strategic intelligence while eliminating enemy armor and dealing with air attacks targeting them. However, shortly afterward, another aerial attack hit them, disabling the tank. Peter went out on his own to seize an AA gun to destroy the aircraft. Afterward, he then returned to the repaired tank and headed to the forward base.

At the forward base, Peter went out again and encountered American patrols. After fighting or sneaking through, Peter recovered the intelligence, and returned to the tank, and proceeded to fall back to the cathedral to regroup with the main German defense force.

As they return to the cathedral, Peter saw a few civilians fleeing in panic and weeping for the lost love, and the deserters hanged to death all over the street, including Hartmann which shocked him the most. While Schröder reaffirmed his belief from before, Peter knew Hartmann did what he was asked to do, to follow the order. All Wehrmacht armor had been destroyed, leaving them alone with no support.

At the cathedral, with no radio to rely on due to aerial attacks, Peter had to go out to find a working one. Their last order was to defend the cathedral at all costs to buy time for the main attack force on the other side of the Rhine. As the Americans pour in, ordering the crew to surrender, Schröder, still clinging to a loyal hope of victory, opened fire at the American troops, and a showdown ensued within the ruins.

The Allies called in an artillery strike on Tiger 237; they had to fall back to the bridge and rejoin the main remaining German forces, but the bridge was destroyed by the Germans. As the tank fell into a crumbling bridge with their left track fell off in the process, rendering the Tiger immobile, Kertz then questioned why the bridge wasn't destroyed before, and he believed the crew was lied to and left to die despite everything they had done to defend Germany. Peter tried to convince Kertz that it was not the case, but Kertz left in sorrow and disbelief. However, Schröder, still on his patriotic mannerism, shot Kertz in cold blood, branding him as a deserter. Peter, shocked with such action, got out of the tank to check on Kertz's injury.

As the American forces reached the crew, urging them to surrender, Schröder opened fire and urged Peter to return to the tank as Peter was checking on Kertz's injury. Much to his anger and disbelief, Peter took off his Iron Cross and surrendered, to which later Schröder aimed his MP40 and shot Peter, However, it is possible the Americans shot Schröder first, depending on the players' interpretation.

With the Allies entering the bridges on the Rhine river until Remagen, and the Soviets entering the Berlin border through the Vistula-Oder rivers in the spring of 1945, all hope for a German victory was lost. However, the Fuhrer's orders are to not surrender, leading to millions of deaths: civilian and military alike. It resulted in capitulation by May 1945, the death of Nazi German government officials, and the end of the war in Europe. 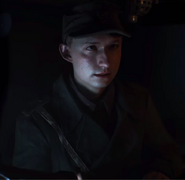 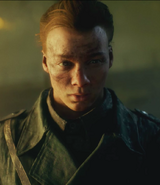