The Lewis Gun is a Codex Entry featured in Battlefield 1. It is unlocked upon obtaining 10 kills with the Lewis Gun. 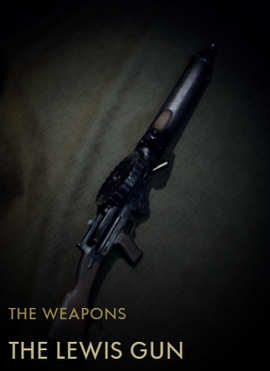 One of the earliest and most successful light machine guns, the Lewis Gun, was designed in the US in 1911, but first failed to garner interest in America. Instead, the designer went overseas in 1913, where the Belgian army quickly saw its benefits and placed orders for it. Soon after it began to be produced in the UK and was adopted as the standard British Army machine gun in late 1915

The gun was also supplied to Russia and purchased or captured by many nations. The Lewis Gun is unusual and iconic with its rifle-style butt and pistol grip, round pan magazine and long metallic cooling jacket over the barrel. This was meant to increase cooling of the weapon by pulling air past the barrel when firing. The flat pan magazines had no spring for feed cartridges into the gun and were instead powered by the action of the gun itself.

Unusually, the Lewis Gun also had an adjustable clock-type recoil spring which allowed the rate of fire of the weapon to be adjusted. It was called "the Belgian rattlesnake" by the Germans that came up against it in 1914, and already by 1916 about 50, 000 Lewis Guns had been produced and the weapon was being extensively used at sea, in the air and in armored vehicles.

When deployed in aircraft, the Lewis Gun typically had the cooling jacket removed and a taller 97-round pan magazine. It was an expensive weapon to produce for its time, but was considered one of the best and most reliable LMGs and went on to see action in WW2 and beyond.

Retrieved from "https://battlefield.fandom.com/wiki/The_Lewis_Gun_(Codex_Entry)?oldid=343143"
Community content is available under CC-BY-SA unless otherwise noted.