The Mark V Tank is a Codex Entry featured in Battlefield 1. It is unlocked upon obtaining ten kills with the Mark V Landship. 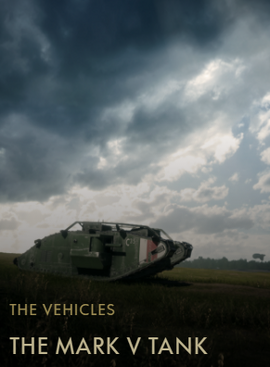 The two six-pounder guns mounted on side sponson was a deliberate design feature to enable the tank to engage targets in the trenches it would cross. This would be impossible with a turret design. The tanks were also fitted with up to 4 machine guns, and became one of the primary tools for breaking through the trench lines on the Western Front. The potential of the tank was proven in World War 1.

CAN YOU IMAGINE 300 WORLD WAR 1 TANK ATTACKING AT THE SAME TIME?Edit

The fifth generation of the British tank entered the war with better performance and thicker armor than its predecessors. 400 were built in 1918, and they saw action in several different battles - at the Battle of Hamel and the Battle of Amiens, where 288 of them fought alongside the British forces. The American 301st Heavy Tank Battalion was also equipped with a smaller number of Mark Vs trying to penetrate the heavily fortified Hindenburg line.

Retrieved from "https://battlefield.fandom.com/wiki/The_Mark_V_Tank_(Codex_Entry)?oldid=343286"
Community content is available under CC-BY-SA unless otherwise noted.