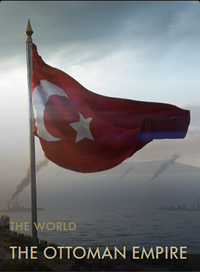 Although the 600-year-old Ottoman Empire was huge - stretching from the Balkans to the Persian Gulf - it was in decay, and had lost wars to both Italy and a Balkan alliance in the years preceding the First World War. However, the Ottoman Empire would still prove to be a formidable opponent, with the Young Turks movement and the institution of a Constitutional government having paved the way for modernization in all aspects of life, including the military.'

Minister of War Enver Pasha, one of the "three Pashas" who basically ran the Empire during the war, dreamed of a Modern Turkish nation that did not look to the Arab world for guidance, but looked to itself. His dream would one day come true, but he would not live to see it.

Retrieved from "https://battlefield.fandom.com/wiki/The_Ottoman_Empire_(Codex_Entry)?oldid=343224"
Community content is available under CC-BY-SA unless otherwise noted.