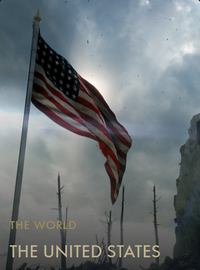 By 1910, the United States had become the world's leading industrial power. Though they remained neutral for the first few years of the war, American industry and finance played a major role. Initially, American reaction to the war was mixed. While the greatest number of immigrants in the states were from Britain (including Ireland), Germans were second and there was sympathy for both sides.'

'However, when the war began, Britain cut Germany's transatlantic cable, so all American reports of the war were routed through Britain, and only what was favorable passed censors. Also events like the sinking of the ocean liner, "Lusitania", and the execution of Edith Cavell, inflamed the American public and war with Germany soon loomed large.

Retrieved from "https://battlefield.fandom.com/wiki/The_United_States_(Codex_Entry)?oldid=343227"
Community content is available under CC-BY-SA unless otherwise noted.