There's Always a First is a Codex Entry featured in Battlefield 1. It is unlocked upon collecting all Field Manuals in the chapter Steel on Steel in the singleplayer mission Through Mud and Blood.

FIRST EVER TANK VS TANK BATTLEEdit 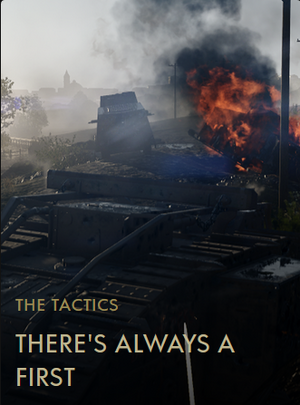 476 allied tanks had rolled in unchallenged by other tanks during the Battle of Cambrai in 1917.

In March 1918, the Germans had penetrated the British lines on the Western Front by more than 40 miles. Ludendorff's forces were less than 10 miles from their goal, Amiens. Amid heavy German artillery bombardment on the outskirts of Villers Bretonneux, British Mark IV tanks and German A7V's engage for the first time in history, marking the beginning of a new type of engagement.

Three Mark IV tanks move in towards the village, and in the mist they see one of the few operational German A7V tanks. The leading British male tank opens fire but misses, whereupon the A7V immediately manages to hit the two female tanks and knock them out of the engagement. They begin to pull back. It is now 1 on 1. The crew in the British male tank tries desperately to get the A7V in its sights and finally manages to score a hit.

The impact kills the 57mm gun operator of the German Tank and the commander decides to withdraw. Two other A7Vs were spotted en route and the lone British tank eventually withdraws as well. By nightfall, Viller-Bretonneux was under German control.

Retrieved from "https://battlefield.fandom.com/wiki/There%27s_Always_a_First_(Codex_Entry)?oldid=343383"
Community content is available under CC-BY-SA unless otherwise noted.