For the weapon sights, see IRNV and FLIR.

The sensors installed in forward-looking infrared cameras—as well as those of other thermal imaging cameras—use detection of infrared radiation, typically emitted from a heat source (thermal radiation), to create a "picture" assembled for video output. They can be used to help pilots and drivers steer their vehicles at night and in fog, or to detect warm objects against a cooler background.

Thermal Optics allow ground vehicles and attack helicopters to see heat signatures through dust and smoke (except IR smoke). All vehicles use a white-on-black FLIR view.

In singleplayer, green-tinted IRNV Optics are used instead. Infantry weapons can attach the IRNV scope. 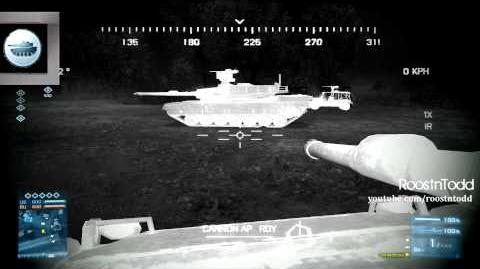 • Allows optional thermal optics in conjunction with daytime optics
"A black and white night vision system that shows heat signatures across all ranges."

Thermal Optics are a type of vehicle optics in Battlefield 4, alongside IRNV Optics.

The thermal optics appear as an "Optics" specialization for the main battle tank, mobile anti-air, attack boat, infantry fighting vehicle and the attack helicopter.[1] They are similar in function to their Battlefield 3 counterpart.

Retrieved from "https://battlefield.fandom.com/wiki/Thermal_Optics?oldid=320391"
Community content is available under CC-BY-SA unless otherwise noted.